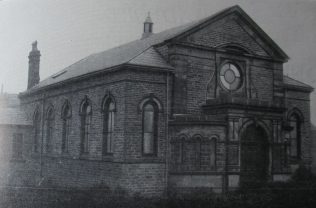 The Methodist Leader of April 7th 1921 contains the following account of the centenary celebrations of Dudley Hill Primitive Methodist chapel in Bradford.

Bradford Centenary Celebrations. Dudley Hill Church, Bradford Fifth Circuit, celebrated its centenary on April 2nd. In the spring of 1821 a band of singing pilgrims, headed by Rev John Coulson, missioned Dudley Hill and established the first Primitive Methodist muse in Bradford. A series of services for three week-ends have been arranged to take the form of a home recognition of the centenary, a circuit and a Connexional recognition. In ideal weather a large congregation of members end friends assembled to convey their good wishes and congratulations. The first act was very impressive, the placing of two beautiful wreaths of flowers near the door of the church “In Memory of the Founders.” It was a gracious tribute to the humble men and women who founded the church.

The building was well filled In the afternoon for the centenary thanksgiving service, conducted by Rev. T. J. Gladwin, of York. A tablet was unveiled in the Memorial Institute by Rev. F. Hobson, in memory of twenty five associated with the church who fell in the war. Four hundred people sat down to the public tea.

In the evening the church was full for the thanksgiving meeting, presided over by Mr. G. H. Robinson, J.P.. Councillor Robert Peel being in the vice chair Eloquent addresses on the origin and influence of Primitive Methodism in the nation and the life of the neighbourhood, and a plea to let the centenary be a new starting point were delivered by Revs. T. J. Gladwin and F. Hobson. The launching of the Centenary Thanksgiving Fund created immense enthusiasm. Promises amounting to considerably over £1,000 were received. including £100 from the chairman and £100 in memory of the late Alderman Abram Peel. The centenary services on Sunday were well attended, and reached a high level, the preacher being Rev. T. J. Gladwin.

The building in the picture was opened in 1886.  The Bradford Telegraph and Argus  reported on the 26th November 2011 that after 125 years of continuous use the building was to close and the congregation move to a nearby church hall. On Google Street View in 2015 it is still standing.