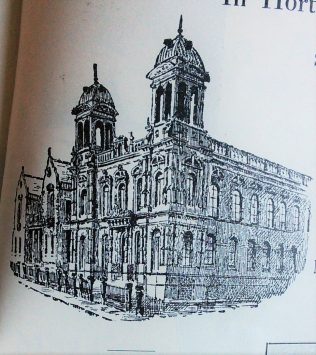 This chapel was used for the Great Missionary Day event at the Primitive Methodist Conference held in Bradford in 1911.  However, I can find no reference to it in any of the usual sources, including JG Terry’s account of the development of Methodism in Bradford listed below.  It is shown in the drawing as a most impressive place

And the reason is because it was not a Primitive Methodist chapel as the comments below confirm; other venues, such as Eastbrook Hall, were used to accommodate big Conference audiences.

I am not able, either, to identify where Horton Lane is.  Is it an old name for Little Horton Lane?  Does the chapel still exist, or any evidence of it?