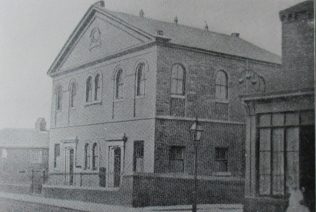 The story of Providence chapel is told in the Handbook issued when the Primitive Methodist Conference came to Bradford in 1930.

In 1824 Land was secured in Kent Street, Manchester Road, and a chapel erected at a cost of £3,500 to accommodate 750 persons.  In the course of time a Sunday School was erected and in these buildings they continued their work until 1861.  The building had one unique feature. The girls occupied the upper floor while the boys were on the lower level.  In order that the superintendent might survey all the scholars at one time, a space was cut out in the floor and here he was so placed that his head appeared among the girls in the upper room while his legs made an impressive show among the boys below.

In 1861 the chapel was burnt down and the society was faced with crushing financial difficulties.  No insurance was in place, there was a mortgage of £2,500 and there were no funds in hand.  But if there was a lack of funds there was no lack of faith or courage.  The brave hand of workers faced the difficulties of the situation and in 1862 Providence chapel – most fittingly so called – was re-opened. This was the precursor to the Bradford Methodist Central Hall opened (in the same location) on August 31st 1893.

The Primitive Methodist Magazine gives further detail.  The magazine for 1826 says that the opening services took place on Friday and Sunday 6th and 8th August 1824 and the preachers were Brothers T Jackson and T Holloday.  The account was written by W Fieldsend & T Holloday who declared it the  ‘largest chapel I have seen in our Connexion’. It had galleries and the Sunday school started with 200 scholars.

The magazine for September 1853 contains an account by Richard Davies of the re-opening of Bradford Primitive Methodist chapel – which I take to be this chapel, although I may be wrong – after repair and improvement. Reopening services took place on  July 31st 1853 with “short and pithy sermons, by the circuit preachers, Messrs Whitehead, Parrot and Davies.

The society was very pleased with the improvements and all that was needed then was “a higher degree of personal piety”. They were negotiating a mortgage for the considerable sum of £2,570 on the chapel, schoolrooms and nine houses; they were aware of the need to reduce this.

The 1881 Primitive Methodist magazine tells us that “commodious Sunday school premises have been erected in connection with the Manchester-road chapel, Bradford”. It was on four floors and included a hall that held 500 and a library. It cost £2,340.