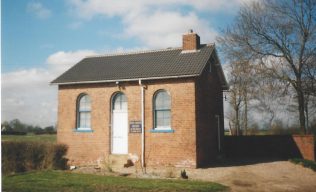 Brandesburton Moor Town is north east of Brandesburton on the road to Bridlington.  Primitive Methodists built the small chapel here in 1870. Primitive Methodism was growing in the area; in Brandesburton itself an Independent chapel was purchased in 1856 and enlarged in 1863.  It was closed in 1976  and was derelict until converted into a crematorium for small animals c. 1985.


Google Street View in 2010 shows it still in that use.