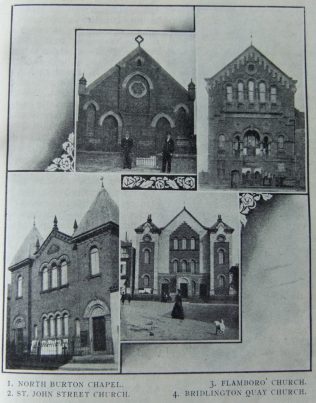 William Clowes preached in Bridlington in 1821 leading to the formation of a society.  The first Bridlington St John’s Primitive Methodist chapel was opened in 1833 but was replaced in 1849.  This church too was demolished in 1877 and replaced on the same site with the church which closed in 1970.  It is now the Co-op Supermarket.

There is an account by Thomas Holliday of the opening of the first Bridlington Primitive Methodist chapel, although he dates it as 31st August 1834 rather than 1833. Opening preachers were W Clowes and A Smith. The society enlarged a building they had acquired and filled it with pews for 166, together with additional free seats.

Eric Fell has set out a well researched account of the history of Methodism in Bridlington on the Circuit website.