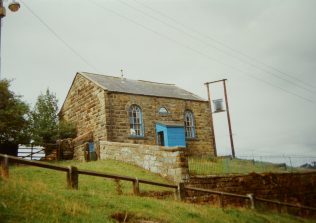 The Primitive Methodist chapel was across the road from the Castle Mound in Castleton.   It is now a private cottage and still states above the door porch that it was built in 1861. After closure it was the residence of the British Legion before being converted into a private dwelling about 2006.

The opening is described by E Hall in the Primitive Methodist magazine. Services at the opening started on October 27th 1861 and were conducted by Rev. J. Barnes, Mr. S. Stott, of Thirsk, Mr. T. Clegg, of Whitby, Revs. E. Hall, J. Barnes, R. Clemitson and Messrs. J. Stott and G. Tweddle of Guisborough. Celebrations included a tea meeting for 150.