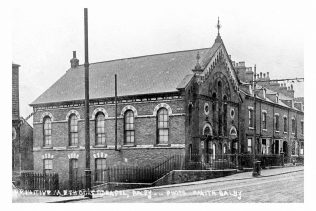 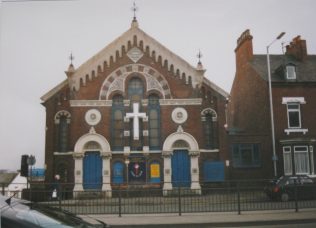 Balby Road Primitive Methodist chapel was opened in 1868.  At the time of Keith Guyler’s photograph in 1998 it was still active but was closed in October 2008. On Google Street View in April 2019 it is disused and for sale, looking in need of love and attention.  It does however have a large white cross on the front and still carries its 1868 datestone high in the apex.

There are pictures of the inside of the chapel, a choral performance and a Band of Hope banner on the Doncaster underbelly website.  At the time of closure it had a Compton Sonatina electronic organ.

The Nooks and Corners  section of Private Eye in 2021 reports that although local planners had given consent for its demolition and replacement by a block of flats, it has since been listed as Grade 2 by Historic England and the developer has told the council that he is drawing up plans for conversion into flats.

The Historic England listing gives four architectural interest reasons for its listing, including:

The site includes other historical detail.