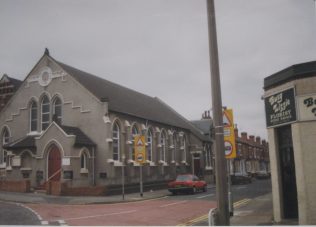 Hyde Park Primitive Methodist chapel in Doncaster is located on Carr House Road on the corner with Cunningham Street.  Keith Guyler notes that the first chapel here was opened in 1880 or possibly 1872 and it served until it was replaced in 1975 by Carr House Wesley (1975).  It amalgamated with Oxford Place and Hyde Park

At the time of the photograph and on Google Street View in September 2014 it is in use as the Church of God of Prophecy.