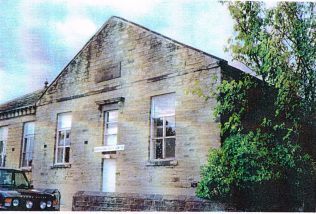 Tom Townsend was born in Drighlington in 1848, and his father Luke Townsend was one of the first Trustees of the chapel.

The Primitive Methodist magazine for November 1853 contains an account by R Davies of the opening of Drighlington Primitive Methodist chapel. He explains that a small chapel was built around 30 years previously on land obtained from the Lord of the manor, but unfortunately they received no title deed. In time the nominal trustees and the society disagreed and the case went to law; the small society was left with a debt of £45. The matter was not fully resolved until 1853 when the first chapel was sold and a new one built in a better location.

The new chapel was 12 yards square by 16′ high. It was opened on September 11th 1853 when Rev J Day of Durham and J Reynard of Leeds preached. Later sermons came from Rev R Davies of Bradford and Rev G Sargent, Baptist minister of Gildersome.