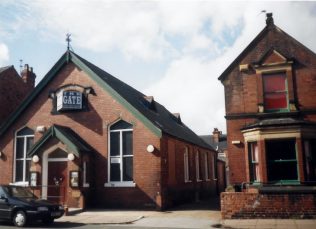 Goole Dunhill Road Primitive Methodist chapel closed in the 1950s and at the time of Keith Guyler’s photograph in 1999 was in use as an arts centre -The Gate.  It was still used as this on Google Street View in 2008. The notes with the photograph do not say when the chapel was opened, although records relating to the chapel between 1895 and 1960 are held by the East Riding of Yorkshire Archives and Local Studies Service

There were three previous Primitive Methodist chapels in Goole, with Dunhill Road Mission added around 1900.  The first chapel was built in North Street in 1835 and remained in use until the end of the 19th century. The second was The Beulah Chapel, Old Goole, which was built 1865 and demolished in the early 1990s. Carlisle Terrace chapel opened in 1875 with a schoolroom added in 1891. The buildings were demolished in 1962.

The former Dunhill Road Mission is the only Primitive Methodist building remaining in Goole.

Goole Civic Society (2012) A local list of heritage assets for the town of Goole: A proposal accessed online 06/04/2020 at https://www.goolecivicsociety.org.uk/assets/documents/local-list-2