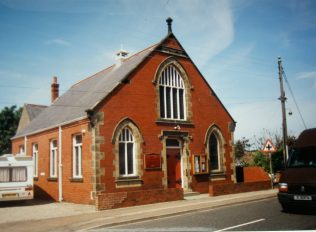 In  Northern Primitive Methodism (1907) WM Patterson comments: “The courage of the Broughton band of two dozen members is remarkable, and ought to bring them great reward. Their old chapel, built in 1859, has been superseded by a good village sanctuary. It will seat 160, and £540 of the cost (£800) was raised when the doors were opened in November, 1907.”

The new chapel held 120 and cost only £54 because the site given by T Carter. Towards that, an encouraging £33/10/0 had been raised. It was located on the opposite side of the road to the 1907 chapel just south of High Street , next to the Jet Miners Inn, behind where Anvil House is currently located.