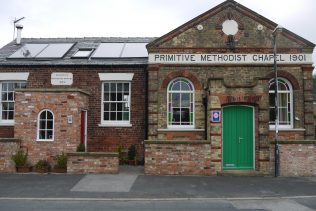 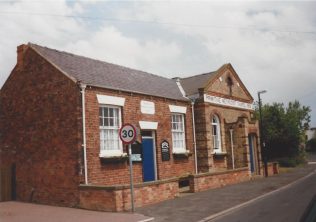 zoom
1862 Great Hatfield Primitive Methodist Chapel (formerly Station Road) as it was in 1997. The 1901 extension is on the right.
Keith Guyler 1997

The photograph shows the Primitive Methodist chapel in Hatfield, near Hornsea in East Yorkshire: the original 1862 building is on the left, and the 1901 chapel is on the right.

Now two holiday cottages, each fitted up for four people, the new chapel could accommodate 140 people, according to the property returns, whilst the old chapel which operated as the Sunday School seated 40 scholars.

There is an account of the opening of the chapel in the Primitive Methodist Magazine, December 1862, 3rd series v 20, pp 756-757. William Garner was stationed in Hull in 1823-1824, which provides a foundation date for the society.

“At this village we have had a feeble society for about forty years. Mr. W. Garner, when a young man, once spent a night in a cow-shed at this place, when friends and homes were few. Several attempts have been made, without success, to obtain land on which to build a chapel. About two years ago a camp-meeting was held here, when a young man, who had been in the habit of spending his Sabbath in the fields, strolled on to the camp-ground, was impressed, and from that time has been one of our most regular hearers: and through his influence with an aged uncle, the owner of considerable property in the parish, a piece of land has been obtained. The foundation stone was laid by Miss Hornsey, of Hornsea Burton, May 22nd, 1862, who presented us with £1. The chapel was opened on July 20th and 27th. Mr. J.T. Robson, of Hull, preached on the former Sabbath, and T. Whittaker on the latter. The chapel is a neat comfortable structure, and will seat about ninety persons. The total cost, fixing a moderate estimate on the land, which was given by Mr. R. Jackson, and the leadings, which were done gratuitously by the farmers, will be a little over £100. We have borrowed on note £55. We are yet a few pounds short of the remainder, which we hope soon to realize. Several souls were converted at the opening services. That the chapel may be a blessing to the place and neighbourhood, is the earnest prayer of the writer.”