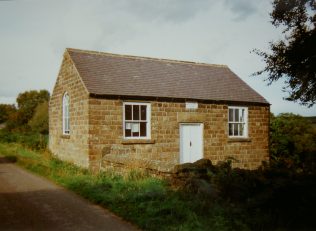 This is another of those small chapels that is miles from anywhere.  It accommodates 40, although you wonder where the congregation would come from.  Nowadays there is only the occasional farm providing employment, but even when the chapel was built in 1865, it was not much more densely populated.  It had a population of 168 in 1848, and the 1914 ordnance survey shows roughly the same twenty houses as today. The valley did once support a public elementary school (established in 1876), as well as the chapel. It is testament to the faith of those who built it and the importance to them of having somewhere to share their belief.

Despite its remote location, in 2015 it is still listed on the plan with occasional services.  The school is now closed.