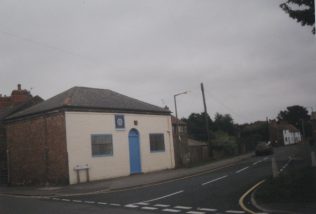 The Primitive Methodist chapel on Station Road, Hatfield, was opened in 1835 and closed in the 1960s.  At the time of Keith Guyler’s photograph in 1999 and on Google Street View in 2009 it was the headquarters of the 68th Doncaster Hatfield  Scouts. Susan Lloyd, one of the section leaders, tells us in February 2020  that it still houses the  scout group.

Susan also confirms that, despite what  this page originally said, it is not grade II listed building.