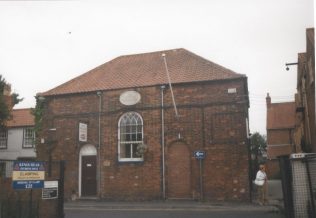 The Yorkshire Returns of the 1851 Census of Religious Worship records that on 30th March the Primitive Methodists met in a chapel built in 1800 for the Wesleyans.  It accommodated 120 with 40 attending in the morning and 60 in the evening.  The average congregation was 50 with 42 in the Sunday school.  It  was signed by Rev James Parkinson of Beverley Road, Hull.

The current Methodist church, built in 1978, is on Church Lane.  This was also the site of a Primitive Methodist chapel and the former hall can be seen in the background of the photograph.  This chapel was built in 1873 and enlarged in  1883 and 1923.

But there is more.  In the early hours of 22nd August 1917, Hedon experienced one of the 50 plus Zeppelin raids on Britain during the Great War  (1914-18), which claimed the lives of more than 500 people.    Fortunately in Hedon there was no loss of life, but the bombing completely destroyed a Primitive Methodist Chapel that stood on Baxter Gate. The building was never repaired and eventually demolished years later.

Can anyone explain how these chapels relate to each other?