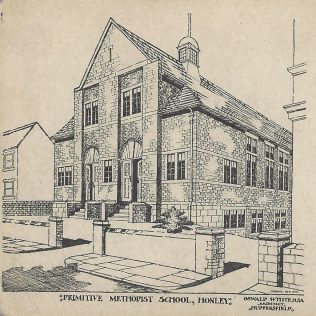 The former Sunday School for the adjoining chapel opened in 1914. In 2017 it is Southgate Theatre.

You can see a picture of the Sunday school on Geograph at :

W Antliff describes the chapel opening in the Primitive Methodist Magazine of 1843.

THE Primitive Methodists missioned Honley more than twenty years ago; and it became the head of a branch of Barnsley circuit.  From Honley the friends proceeded to mission Huddersfield and the adjacent villages; in some of which there are good societies.  W. Taylor, T. Holliday, and J. Gilbert, are dear to the recollections of many in this neighbourhood, as they first came to Honley, preaching the gospel of Christ.  What is now the Huddersfield circuit was then the Honley branch of Barnsley circuit.  “What hath God wrought!”

A house was, for some time, occupied as a place of worship at Honley; then a room was taken; now we have a beautiful chapel.  It presents a chaste and noble appearance,—stands on the finest cite in the town, as is generally allowed,—and is an ornament to the neighbourhood.  There is a population of three or four thousands of people, and the new chapel will accommodate a tenth part thereof.

We cheerfully acknowledge the kindness of the Wesleyan and Independent ministers and friends on the occasion; and trust that a kindly spirit will ever be cherished among the different sections of the church at Honley.”