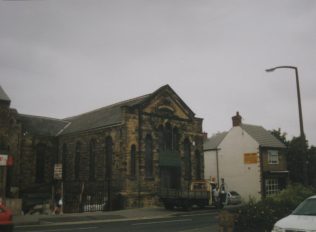 The chapel was opened in 1870 and closed in the 1960s.  For a while it was used by Jebsons as a DIY shop but by the time of Keith Guyler’s photograph in 2002 he described it as semi derelict.   On Google Street View in 2009 it looks tidier although the part of the building to the left rear of the chapel has disappeared.