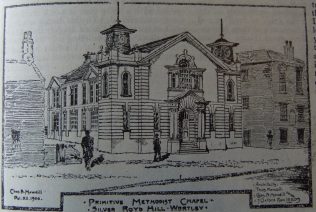 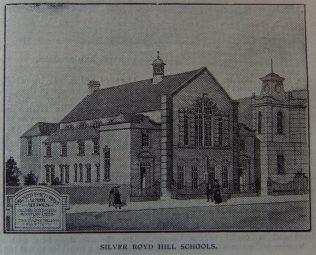 Silver Royd Hill chapel in the Leeds Third circuit was built in 1834. In 1866 the chapel was lengthened by 5 yards, and vestry and infant school capacity added.

The cost was £355 of which they had raised £300. T Dearlove tells us about it in the Primitive Methodist magazine.

By 1907, an account in the Christian Messenger gives a dramatic picture of the society:

“Silver Royd Hill has been called “the most aggressive society in Leeds.” It has done much to justify the description. Four years ago, finding themselves crowded out in the old place and the work suffering, they rose up and built the new chapel at a cost of over £4,000. During the past winter they have opened a suite of new schools which have involved a further outlay of £3,000. There is a large congregation, with a membership of 170, and a school of 400 scholars. The congregation is composed exclusively of the working class, but the spirit of devotion and sacrifice that has characterized them has enabled them to achieve great things. Where all have done well it is almost impossible to make any selection, but Mr. W.W. Turner has been in labours more abundant. The Church owes much to his zeal and his gifts. Mr. Sowray has been for many years society steward and a valued worker. The choir, under the leadership of Mr. A. Hainsworth, has contributed in no small degree to the material and spiritual progress. To have a choir that will sing, with the same care and fervour, a Sankey hymn or an oratorio, is to have a valuable possession. Leeds Sixth has more than one choir of which this is true.