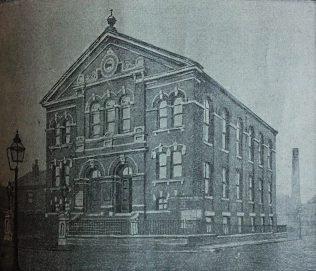 Zion Primitive Methodist chapel in Joseph Street, Hunslet was built in 1874 at the junction of Joseph Street and Jack Lane.

It was one of the venues used for the Primitive Methodist Conference when it came to Leeds in 1898.

The Religion and Places in Leeds Project says that in 1905 there were 129 chapels in Leeds of one Methodist branch or another; in 2005 there were 36 of which 19 had been built post war. Zion Primitive Methodist chapel is one of those that have disappeared, closing around 1964; the whole area has been substantially re-developed.

The original Wesleyan chapel in Hunslet, built at the junction of Jack Lane with Waterloo Road, was opened in 1780 and extended in 1819. Following the opening of Centenary chapel, Waterloo Road, in December 1839 it was acquired by an Independent congregation who in turn sold it to the Primitive Methodists in 1846 who built a schoolroom on the site of the vestries, opened in April 1846.

It was replaced by Zion, Joseph Street, in October 1874, architect Kirk & Sons, Dewsbury, and demolished c1974. That of 1780 became commercial premises and at the time of its demolition in the 1970s was a chemist’s shop.