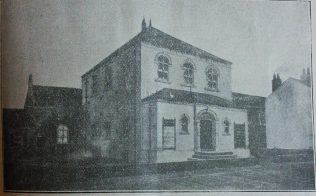 Prince’s Field Primitive Methodist chapel in Clowes Street, off Jack Lane, was one of the venues used when the Primitive Methodist Conference came to Leeds in 1898.  The chapel was built in 1834 in the Italian style. It was constructed in brick and covered in cement and could accommodate five hundred people. In 1867 schools for five hundred children were built behind the chapel.

The Chapel was renovated and altered with the addition of a porch to the state shown in the photograph in 1885.  It closed around 1929 and was demolished in the 1970s.

The Primitive Methodist magazine for July 1857 contains an account by J Snowdon of the re-opening of Prince’s Field Primitive Methodist chapel on Sunday April 12th 1857.  The chapel had been closed for painting and whitewashing.  There were several services and a tea meeting.  Preachers included Rev T Newell, Rev W Dawson (Wesleyan), bros Ely, T Pearson, J Pollard, B Myres, R Howcroft, W Welford and the author.  Sufficient funds were raised in the meetings to cover the costs of the renovations.

Opened in 1837, this was the first Leeds Primitive Methodist chapel to be designed by any architect, namely, James Simpson.  A schoolroom was added to the rear in 1868. A porch was added in 1885, the architect being Thomas Howdill.  Its future was for a time threatened by the widening of the adjacent Midland Railway but closure finally came in 1929, the area being slum cleared