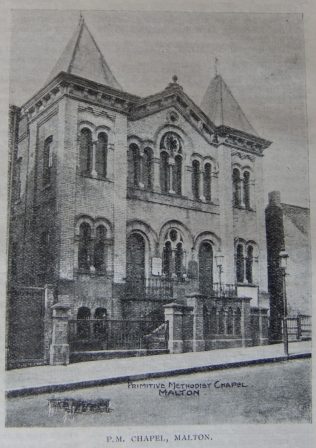 The foundation stone had been laid on Wednesday July 11th 1866 by John Hopkins Esq, Bailiff of the borough. After tea for five or six hundred(!), Captain Copperthwaite chaired a public meeting in the Wesleyan chapel. Subsequently there was a large bazaar which raised a notable sum towards the cost.

The first of the opening services was led by Rev T Newsome of Hull, and the opening celebrations continued over the following six weeks. They finished on Wednesday July 3rd with services led by Rev T Waumsley of Driffield and Rev S Antliff of Derby.  And of course a further celebration tea.

The chapel, which seated 500 and with a school room for 200,  was well sited in the middle of town. Plans were drawn up by Mr J Gibson of Malton and all the work was done my tradesmen in the town. The land is on a 99 year lease from the Right Hon Earl Fitzwilliam at a ground rent of £10 per annum.

On the 1891 Ordnance Survey map a Primitive Methodist chapel is shown on Wheelgate, just south of the Cross Keys pub.  On maps I can access, it disappears between 1938 and 1970.  There is a row of modern shops on the site in 2011.

The 1906 Christian Messenger tells us a little more of the rather unpromising chapel. “Our chapel in Malton is situated in one of the principal thoroughfares, and was built forty years ago. Its school is under the chapel. Four feet below the level of the street, with no light from the rear, and very little from the front, and overshadowed on each of its longer sides by adjoining property, even at noonday in midsummer it requires artificial light. Its two vestries are almost as dull. The lease has yet sixty years to run, and the ground-rent is but £10 per year. A new chapel is out of the question, but £100 could be made to work wonders. The number of members is seventy, and there are over a hundred scholars.”