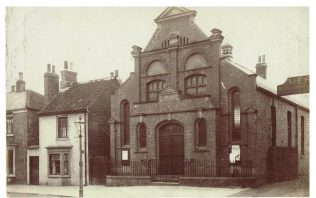 The first Primitive Methodist Chapel in Market Weighton was built in 1828. In 1851 it had an average attendance, at both morning and evening services, of 140 people.

A second Chapel was built in 1860, and by 1892 the Primitive Methodists also owned the Temperance Hall (built in 1841) which was used for lectures.

Form the date stone, the chapel in the photograph was built in 1902.

The foundation stone for the 1860 chapel was laid on Thursday  November 3rd 1859 by Miss Hodge, her father, Henry Hodge of Hull having given his permission for her to do it. She was the granddaughter of William Simpson of North Cave who built the first Yorkshire Primitive Methodist chapel. The congregation met in the Temperance Hall and sang their way to to new site.