You are here: HomenextChapelsnextYorkshirenextN - PnextNewton on Rawcliffe Primitive Methodist chapel 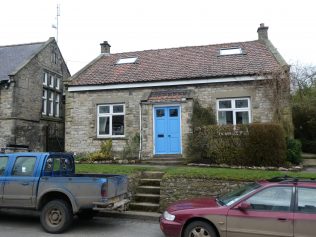 The Primitive Methodist magazine for August 1853 contains an account of the opening of Newton Primitive Methodist chapel in the Pickering circuit. I couldn’t find a place called Newton in the area; thanks to Pat Donnor and Philip Thornborow for confirming that it is Newton on Rawcliffe, near Pickering.

The account was written on behalf of the trustees by by A McKechnie (President) and John Milner (Secretary) trustees of the chapel. The society first met in a cartshed belonging to Isaac Harland (?) then in a room that was”very damp, badly lighted and the road to it was through a farm yard.” William Harland who became Superintendent of the Scarborough circuit preached his first sermon there.

A new chapel was opened in 20th and 22nd May 1853.  Land was given by J Young of Stape, J Watson of Pickering made the deeds and T Michelson gave the timber for the roof and sleepers. If everything had been paid for the cost would have been £100; the actual cost was £40. The chapel measured 27′ x 20.5′ and accommodated 100. J Young and S Stephenson collected nearly half of the money.

Sermons at the opening services and tea meetings were preached by William Harland and J Harvey  of Malton.