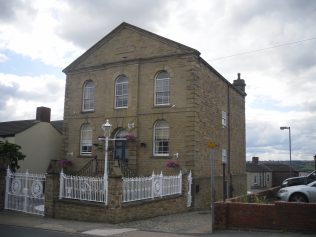 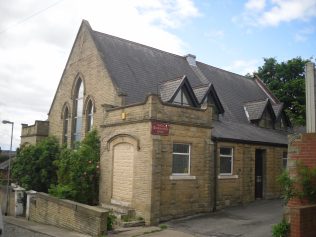 On Street View in 2008 and later it is in residential use.

The pediment has a central tablet inscribed:

“At Ossett a very commodious chapel, with a school-room and two dwelling houses underneath, was opened for divine worship under very encouraging financial circumstances in November and December, 1863. Externally, it is considered the handsomest building in the neighbourhood, and when an improvement which is contemplated in the internal arrangement, shall have been completed, it will be a valuable piece of connexional property.

It is 16 yards by 12, and galleried all round, and will accommodate about 500 persons. The entire cost is about £1,100, towards which upwards of £400 have been raised already ; bazaars, tea-meetings, collections, public and private beggings and firings having all been brought into requisition, to accomplish this result.

To the honour of the Independents at Ossett, during the whole time that our chapel was in the course of erection, they allowed us the use of their very commodious chapel every Sabbath afternoon, and their school-room for week-day services. At the opening their minister preached for us in our new chapel, and allowed our minister to preach at the same time and make a collection in his chapel, and thanks to the Wesleyans, they did likewise.”

Thanks to Dr Gerard Charmley for supplying the pictures and confirming that the Queen Street Chapel, Mount Zion, is very much still there, albeit in residential use. He tells us that he schoolroom down the hill was used by the Congregationalists (later URC), but is now sliding into dereliction.