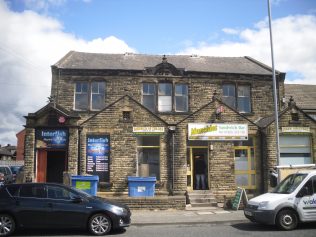 Ordnance Survey maps from 1890 show a Primitive Methodist chapel on Dewsbury Road, midway between Stithy Street and Naylor Street. On the 1970-1975 map it is labelled Dewsbury Road Methodist Church.

Dr Gerard Charmley confirms that Ossett Street Side (Gawthorpe) does not in fact survive. A rather splendid schoolroom remains, but the site of the chapel has been cleared for some time. Thanks to Dr Charmley for supplying the picture

The opening of the chapel in October 1863 is described by J Dodsworth  in the Primitive Methodist magazine 1864.

“At Ossett Street Side, otherwise known as Gawthorpe, we have built a beautiful new chapel, including a spacious school room and chapel-keeper’s house. The chapel is about 45 feet by 36, with a rising gallery, 9 pews deep, and 4 wide.

The total cost of the entire premises is about .£550, toward which, by tea-meetings, bazaars, collections, and subscriptions, donations, &c, about £160 have been raised, and it is hoped that at their first anniversary the hard-working trustees will succeed in completing the one third of the entire cost, according to rule, £30 of which, or thereabout, having been promised already. This commodious sanctuary was dedicated to God in October and November, 1863.”