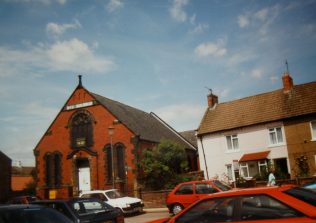 Stokesley Primitive Methodist chapel as shown in the picture was built in 1903 when they decided that better premises than the previous chapel (built in 1835 in Back Lane) were needed.  The site on High Green (College Square) was acquired for £40 and the new chapel was built for a total cost of £832.