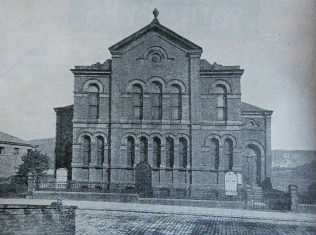 I don’t know when the first Shipley Primitive Methodist chapel was opened, but John Maylard in the Primitive Methodist magazine tells us of the enlargement of a previous chapel in 1859. Increasing congregations could not be accommodated so they set to and one wall was moved 21′ back, the roof turned, walls raised, a gallery added and a schoolroom created underneath for 300. The society was optimistic about  covering the cost.

The Shipley Primitive Methodist chapel in the picture was built in 1871 on Saltaire Road.

Like the Board School next door, it was built on land donated by Titus Salt. He had purchased land to the north of Saltaire Road in the early 1850s, when he was preparing to build Saltaire.

The site in 2015 is occupied by Northcliffe Motor services. The former terraced housing opposite has been replaced by blocks of flats.