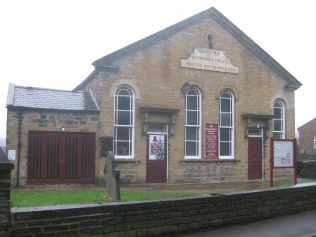 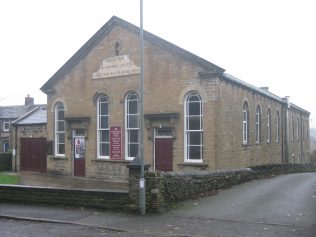 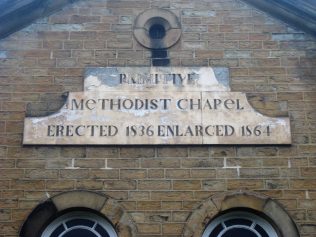 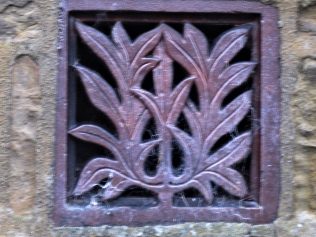 Skelmanthorpe Primitive Methodist Chapel, sometimes called ‘Providential’, was erected in 1836.  The stone chapel was probably built on the edge of the village. In 2018,  due to housing developments etc,  it is now in the middle. It was enlarged in 1864, again built of stone. The enlargement was longer than the 1836 chapel having 5 windows to 4 of the chapel and had two storeys. There is one gravestone at the front of the chapel stating : ‘In Loving Memory of Joseph Wadsworth of Skelmanthorpe. Born November 12th 1823. Died Jan. 18th 1885. He was a Primitive Methodist Class Leader 28 years and Sunday School Superintendent 30 years.  Also Priscilla his widow. Born August 22nd 1825. Died June 12th 1898.’

There is a photo of an air vent cover used on the chapel building which is unusual in design.

The  1864 enlargement is described in two articles in the Primitive Methodist magazine by J Robinson:

“Skelmanthorpe, Clayton West.—The foundation-stone for the enlargement of Skelmanthorpe Chapel, Clayton West circuit, was laid May 20th. A numerous company assembled to witness the ceremony.

The stone was laid by Mr. H. Lodge, in the name of the Father, Son, and Holy Ghost Mr. Lodge then observed that when he was invited to lay the stone, he thought of giving £5 ; but after considering the matter over, he had concluded to give £7. He had been seven years from Skelmanthorpe (his native village), and during that time God had blessed him and been with him ; therefore he should give a pound for every year he had been away.

A collection was made, and the Rev. R. Davies (of London), and the Rev. T. Dearlove (of Huddersfield), addressed the congregation. The company then adjourned to the Wesleyan Reform chapel, which had been kindly lent for the occasion, where an excellent tea was provided.

After tea a public meeting was held in our own chapel, presided over by Mr. Lodge, and very efficiently addressed by the Revs. R. Davies, T. Dearlove, and others. J. Robinson gave some particulars respecting the enlargement, stating that it was intended to bring the chapel front out six yards, provide about seventy new sittings, and give increased accommodation to the Sunday school. He named that the cost of the enlargement would be about £200, £100 of which had already been raised.

On Sunday, May 29, two very practical and profitable sermons were preached in the chapel by the Rev. R. Davies, and collections made in behalf of the enlargement fund, which amounted to £5 0s. 5d. The whole of the collections, including the profits of the tea and Mr. Lodge’s donation, amounted to £20 19s. 5½ d. All the services were of a very pleasing and profitable character. J. Robinson.”

“Re-opening of Skelmanthorpe Chapel, Clayton West Circuit.— Six yards have been added to the length of the chapel ; the roof is new, and the walls have been raised three feet ; the ceiling is neatly moulded. The front presents a commanding aspect compared with the old one. Seventy additional sittings have been provided.

On Saturday, November 6th, 1864, a tea meeting was held. After tea a very interesting meeting took place, and addresses were de livered by the Revs. A. Worsnop, of Huddersiield, W. Axford (Independent), of Clayton West, J. Robinson, and G. H. Beeley. Mr. H. Lodge, of Halifax, occupied the chair. On Sunday, November 6th, sermons were preached by Mr. Joseph Marsden of Doncaster, and the Rev. A. Worsnop. On the following two Sabbaths sermons were preached by the Rev. J. Simpson, of Halifax, Mr. H. Lodge, and Mr. Joshua Fletcher, of Silsden. T

he total amount raised at the opening services was £26. The money expended in these alterations exceeds £300. We have raised about £160, and we have a few subscriptions to come in, so that we have raised one half of the cost. J. Robinson.”