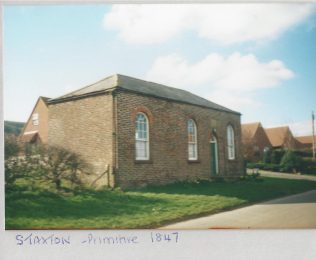 Staxton Primitive Methodist chapel was opened in 1847 according to the date stone over the door.   It is built in red brick in Flemish bond, with a slate roof. The opening on December 12th is recorded in the Primitive Methodist magazine  by J Cheeseman. There is further detail there.

On Google Street View in March 2009 it is disused and boarded up.