Sutton on the Forest, York 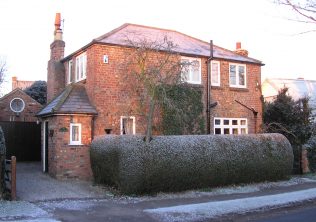 I don’t know why it has taken me so long to get round to trying to find out more about our dwelling, which was formally the Primitive Methodist Chapel in the small village of Sutton on the Forest, near Easingwold, North Yorkshire.

We have often wondered what it would have looked like back in it’s heyday but it seems that no photographs or drawings exist, certainly not at a local level. I have tried to work out where doors and windows would have been by examining the brickwork but it has proved impossible. Perhaps someone out there has some information?

The land was conveyed by a William Barker, Farmer, and ‘his wife Rachael’ in February 1861 to a trust for the erection of a Chapel, Meeting house or School for the princely sum of £10.00 and a Chapel was built in 1868. I have the original indenture, framed, in what is now our hallway.

It seems the Chapel fell into disuse and it was converted into a dwellinghouse in 1934.

I have added a photo to show what it is now like but would be really interested to know how it would have appeared originally.