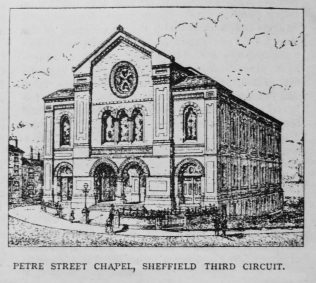 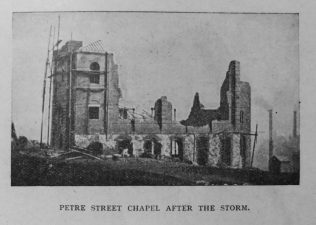 Petre Street Primitive Methodist chapel was on the south side of the road, in the angle formed by the junction of Sutherland Street with Harleston Street. At the time it was an area of terraced housing; now the area is re-wilding

The Primitive Methodist magazine of 1901 tells us Petre Street is “the largest Connexional chapel in the city, being capable of seating 1,250 persons, with a spacious schoolroom and institutes, and a convenient suite of class-rooms attached.

The history of this church possesses peculiar interest on account of the mingled disaster and success which has attended it. When the building was approaching completion the roof was blown down during a winter storm, causing some hundreds of pounds damage, which, however, the contractor bore.

Scarcely had the injury been repaired when, on the 31st January, 1868, a terrific storm broke and raged for two days and nights, to the full violence of which the chapel was exposed by its lofty and, at that time, isolated position. For forty-eight hours the building stood, but the hurricane so increased in fury that at last it gave way, and the roof fell in bringing the walls down to the floor. It is impossible to describe the  anguish and despair which fell upon the little band of members and trustees, who had spent hours in anxious watching, when the building collapsed, and their holy and beautiful house, in one tremendous crash, became a heap of ruins. This disaster involved the trustees in financial difficulty, as the second loss, about £1,200, fell on them.

his practical sympathy infused new life into the dispirited church. The public generously responded to the appeal for help; Mr. Holden alone collected £200; the members contributed weekly to the restoration fund, and the difficulty was overcome. The debt remaining on the completed building was £2,400.

In December, 1872, the Third Circuit was separated from the Second with 472 members, and with Petre Street at its head. This has been one of the most aggressive and prosperous of the Sheffield Circuits. By the erection of class-rooms, institute and organ, and the purchase of the freehold for £700, by which an annual ground rent of £23 18s. was redeemed, together with other improvements, in addition to the original outlay, over £7,000 has been spent upon the property, and the debt remaining is under £1,200.

The 1890 Primitive Methodist magazine tells that increased accommodation for young people’s work was in progress, organised by the young people themselves. The March 1891 magazine reports that the Institute has been opened and they have succeeded in raising most of the £400 cost.