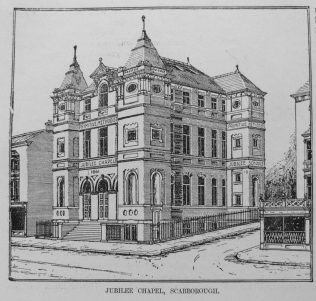 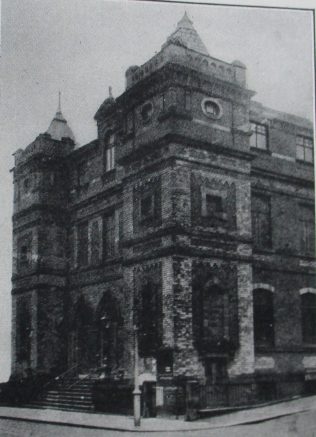 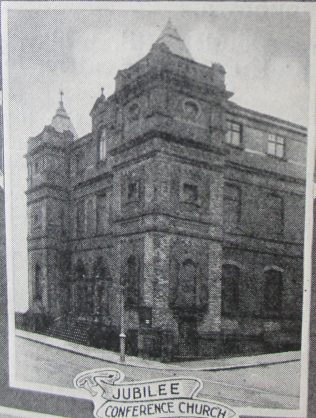 Scarborough Jubilee Primitive Methodist chapel in Aberdeen Walk dates from 1861, in a period when the town – and the number of Methodists in it – grew very rapidly.  In the 1860s 5 new Methodist chapels of one brand or another were opened.

Jubilee chapel was designed by William Baldwin Stewart who contributed many buildings to Victorian Scarborough, including the North Sea Bathing Infirmary on the Foreshore. It must have been spectacular; it accommodated 1,140 and boasted lighting by a corona lamp containing 80 gas jets.

It was completely demolished in 1966 and replaced first by a supermarket, then by Scarborough’s Job Centre and on Street View in 2015 it is vacant.

The ceremony to lay the foundation stone is recorded in great detail by HC in the Primitive Methodist magazine.

“(On Friday, July 20th, 1860) the foundation-stone of their new chapel, in Aberdeen Walk, was laid by William Hodge, Esq., of Hull. The weather was exceedingly unfavourable ; the rain falling in torrents during the whole of the time occupied by the proceedings. The ceremony was necessarily brief, singing and prayer, with a few words from Mr. Hodge, sufficed to complete, the service, and the company retired.”

At the following meeting in the Town Hall, H Campbell having taken the chair, apologised for the absence of the Sheriff of Hull. This is the second Prim ceremony I’ve come across recently where he failed to attend, but in each case he sent a decent donation which was (possibly) more welcome.

The opening is recorded by Thomas Greenbury. The highly decorated building seated 1,140, boasted vestries, caretaker’s accommodation, classrooms, a large schoolroom for 300 and a tower with an easy staircase to the gallery. It cost £3,000.