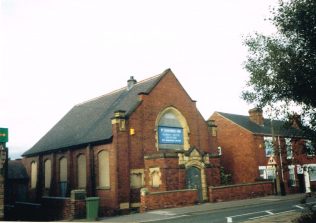 Snarlston Common Primitive Methodist chapel which accommodated 240 was opened in 1913 and was closed in the 1960s.  At the time of Keith Guyler’s photograph it was a plumbing and heating business. However, on Google Street View in 2009 it had been demolished and replaced by a pair of new houses.