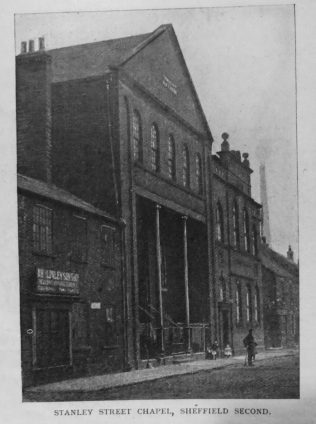 There is an account by John Brownson of the opening of Bethesda Primitive Methodist chapel in Stanley Street, Sheffield. The opening services were completed on Sunday, February 3rd, 1856. The officiating ministers were the Rev. Thomas Raffles, LL.D., of Liverpool; Messrs. Newsome, of Hull; Jefferson, of Burton-on-Trent; and Sanderson, of Scotter.

The chapel was considerable: “The chapel is 63 feet long, 45 feet wide, and 32 feet from the floor to the ceiling. It is well lighted, and properly ventilated. It is very eligibly situated, and at a suitable distance from our other places of worship. It will comfortably seat nearly 900 persons. It is beautiful in appearance and commodious in its internal arrangements. Underneath the chapel we have two school-rooms, each 38 feet by 18% feet, 10 feet high, with good boarded floors. And also two class vestries, each 18% feet by 12% feet.

The land is leasehold, for the term of 800 years; and the ground-rent is £7 per annum. The entire cost will not exceed £1,400 towards which we have already received, by opening collections, donations, etc., £500, being somewhat more than one-third of the outlay; and we purpose to make it up to the sum of £600.“

Stanley Street was one of the venues used when the Primitive Methodist Conference came to Sheffield in 1901.  The Sunday School was next door.

By the outbreak of the Second World War, the chapel had become the AEU Institute. Stanley Street is an industrial area in 2016.  What happened to the chapel?