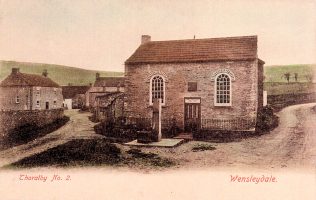 zoom
The Primitive Methodist Chapel, Thoralby, c. 1905. From a postcard given to Penny Ellis by her grandmother. She and Penny's grandfather were both staunch Methodists
postcard from the collection of F. & M.E. Snaith 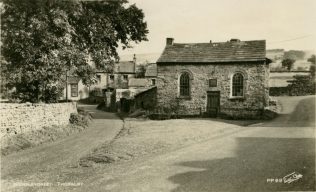 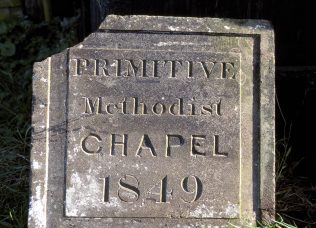 zoom
Thoralby, Primitive Methodist Chapel datestone. The datestone was removed by Penny Ellis' grandfather and father when they converted the chapel into a farm building
from Penny Ellis' Thoralby through time website 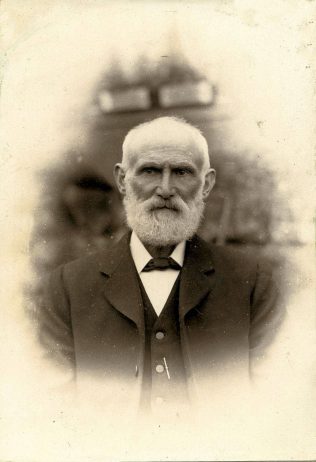 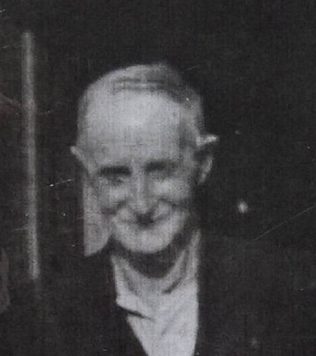 Thanks to Penny Ellis  – born and raised in Thoralby  – for the story of Thoralby Primitive Methodist chapel.  Penny runs the Thoralby through time website – a fascinating picture of life in the village and the source (with permission) of much information on this page .

Although Thoralby Primitive Methodist Chapel was opened 1849, converting from the former Poor House,  Primitive Methodists were active  in Thoralby much earlier, and Thoralby is on the Middleham Circuit Preaching plan for 1822-3, with fortnightly services at 2 pm on the Sunday afternoon.

In 1849, sixteen property owners, gave written consent “to the Primitive Methodist Connexion at Thoralby to erect a meeting house or chapel, undisturbed on the plat of ground where the poor houses formerly stood and to make use of the stones on the place for the same, adjoin the street near Mr. George Rider’s” [Now Viking House.]

The Trustees appointed on May 1849 were:

The opening on October 14th 1849 is reported by John Blackburn in the 1849 Primitive Methodist magazine.  T Crompton of Thirsk was the opening preacher. The chapel was 28′ x 22′ with a gallery at the front that accommodated around 40 – 50 people; overall the chapel held around 200 people. The land was leased to the Trustees for 999 years at a annual payment of three pence. The chapel was valued at £110. They had raised around £35 towards the costm, and borrowed £30 “on a note”.

The 1851 Census of Places of Public Religious Worship records that Thoralby Prim chapel had a morning attendance of 30 people (twice the village Wesleyan chapel). Popularity in the evening was reversed – 50 at the Wesleyans and 30 at the Prim chapel. However, in the afternoon and exceptional 120 worshippers gathered at the Prim chapel – probably combining both Prims and Wesleyans and others from nearby villages and farms for some sort of celebration. Both Wesleyan and Prim chapels had Sunday schools, with 12 attending the Prim school. See the attached transcription

The chapel closed for worship with Methodist Union in 1932, but was still used by the community for knitting during WW2, as they had done in WW1.   During WW2, due to the influx of evacuees to the area, it was also used as a Youth Club.

Now converted into a farm building, it was bought by Penny’s grandfather, Frank Snaith and is still owned by the family. Frank and his wife Martha (née Dinsdale) were both staunch Methodists, Frank being chapel steward, whilst Martha’s father William Dinsdale was a lay preacher and Sunday school teacher. (Martha’s sister, Margaret Kearton Dinsdale was chapel organist, a position she continued when her parents moved to nearby West Burton).

The two pictures of the chapel come from postcards. The 1905 picture was given to Penny by her grandmother.  The building ‘white washed’, at the end of the road is ‘Holmeside Farm’, Penny’s birthplace and the family farm.

The later postcard shows the chapel in the 1920s or 1930s.  It appears closed so is probably after Methodist Union in 1932. The water pump seen in the 1905 postcard  has been removed as piped water came to the village in 1906.

Richmond & Ripon Chronicle 18th April, 1868 ​TEA FESTIVAL. On Good Friday afternoon the Primitive Methodists of Thoralby held their annual tea festival, when about 350 persons sat down to an excellent repast. After tea the chapel was crowded to excess by an attentive audience, which was addressed by the Rev. G. Stout, F. Rivers, Mr W. Scurrah, and Miss Ann Anakin.

Richmond & Ripon Chronicle 7th November, 1868 THORALBY TOTAL ABSTINENCE SOCIETY. A public meeting was held in the Primitive Methodist Chapel, Thoralby, on Tuesday, the 27th ult. The chair was taken by Mr. James Dinsdale of Redmire, and the meeting was most earnestly and effectively addressed by Messrs. David Plews, of Redmire, and Ralph Horn and John Plews, of Castle Bolton.  At the close of the meeting sixteen names were added to the pledge book.

Tea meetings were an essential part of Primitive Methodist life, not only bringing people together, but often raising substantial amounts of money; and the Primitive Methodists were strongly associated with the total abstinence movement.

Craven Herald – 27 April 1889 THORALBY: THE PRIMITIVE METHODISTS of the above village held their annual tea meeting in the New Reading-Room on Good Friday, to which a good number sat down. The tables were presided over by Mrs Lambert, Mrs Willis, Mrs Thwaite and Mrs Bushby, assisted by the following ladies, Mrs Jos. Webster, Mrs F. Sayer, Miss E. Thwaite, the Misses Ellen and Lizzie Willis, Miss Dora Webster, Miss E. Dinsdale, and Miss A. Heseltine. In the evening a public meeting was held, presided over by Mr. J. W. Spenseley, and addressees were delivered by the Rev. J.C. Livesey, Mr H. Tennant and Mr C. Walker. The choir, assisted by Mr E. Brown and Mr. J. Dinsdale, rendered valuable assistance by singing a choice selection of hymns. Miss Ellen Willis presided at the harmonium.

Craven Herald – Saturday 13 July 1889 THORALBY:   THE PRIMITIVE METHODIST CHAPEL was re-opened on Sunday after being closed several weeks for re-painting, &c. In the afternoon a sermon was preached by Mr. A. Kettlewell, Cams House, Hawes, and in the evening a service of song entitled “Rhoda or the Gipsy Girl’s Mission of Love” was given by the choir.