A history based on the minutes of the Trustees meeting 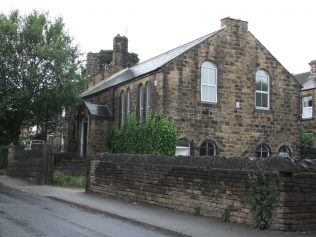 The first Tingley Primitive Methodists worshipped in a barn at Topcliffe Farm. Later they met in people’s homes.

Mr A Buttery of Morley was asked to take the levels of the ground purchased for the chapel, with a view to preparing plans for the new chapel.

On 21 January 1979, a special meeting at the Preaching Room, Balaclava West, approved the plans and specifications prepared by Mr Buttery. (The local pit was known locally as Balaklava because it opened in the year of the battle in the Crimean War. A row of miner’s cottages was called Balaklava Terrace.)

On 18 February the Trustees met to discuss the tendering process and decided to advertise in the Morley Observer and Leeds Mercury.

On 4 March, the trustees agreed to dig the foundations themselves. The date for the foundation stone-laying was set for 5 April. The Rev  Alexander McKechnie was to be asked to give a speech. The following were to be invited to lay stones: Mr Longbotom. Mr Wardsath, Mr Greenwood, Mr Cocker, George Hangs, Samuel Stodel, George Walton and John Oxnard.

On 18 March the following contractors were agreed.

On 27 May the name of the chapel was agreed to be Zion.

In July the opening was planned for September with the following ministers to be invited; Joseph Wood,  James Travis, Samuel Laycock, James Bootland, Edwin Dalton.

In September the Trustees resolved to buy ten hymn books for the use by Trustees and visitors. On 14 October it was agreed that seats in the gallery be let at 1 shilling per quarter.

Routine Life in the Chapel

In March 1887 arrangements were made for the chapel to be cleaned twice a year in January and June. Pew holders were expected to clean their own pews or pay the chapel keeper 4d each.

In 1888 arrangements were put in place for an organist at a salary not to exceed £1 10s per annum. The chapel also needed to be re-pointed and re-painted. In this year, water was installed by Mr Cooper of Drighlington.

In 1889, Edward Hughes became Treasurer of the Trustees, a position he held until his death in 1928. Alfred A Buckley became Secretary to the Trustees and Society Steward.

The redecoration cost £8. Two Sunday re-openings were organized with the preachers Rev James Hall on the first Sunday and Rev David Scruton on the second Sunday.

In October 1889, Mrs Tomlinson was appointed as Chapel keeper

In 1892 the Trustees began the search for an organ. An American organ was chosen. This obviously did not work out because in November of that year it was returned. Audsley Gomersall went with the party from the church to give his opinion. Audsley was a noted musician in the area. He and his brother, Samuel, had founded the Gomersall’s mineral water company, later known as Magpie Minerals.

1896 saw another repainting of the chapel. Arrangements were also put in place to hold a bazaar on Easter Monday using the new Board School in Tingley as the venue.

In 1898 the Band of Hope was allowed to put a cupboard in the Vestry.

In December 1901, the chapel keeper salary was £4 per annum.

In 1919 Audsley Gomersall retires due to ill health.

In 1920 the football club was not allowed to use the vestry as a dressing and meeting room.

The family connections can be illustrated as follows. James Henry Hughes (the author’s maternal grandfather) married a niece of Audsley Gomersall.  He was the son of Edward Hughes. Charles Fox was a brother-in-law of Edward Hughes.

In 1922 a new organ was procured. This resulted in the need to employ an organ blower in 1923.

In 1927, electric lighting was installed in the chapel.

When Edward Hughes died a memorial tablet was unveiled on 5 January 1929 by Mrs R Auty of Tingley.

A further Trust is formed.

This was first time women had been appointed Trustees. There were further revisions of the Trustees Membership in 1952 and 1966 before the Church Council took over the Trustees responsibilities in 1977.

In 1969 the building was suffering rising damp in the vestries, the chapel roof needed repair and the Sunday school building had to be closed.  Nevertheless the society decided to continue to meet.

Centenary celebrations took place in 1979 in the form of a tea. In that year the caretaker’s salary, which had been £52 per annum for several years was doubled, and the organist was to receive £25 per annum.

1996 saw further problems with rising damp in the vestry and the need for interior decorating. With just 10 members, and the key roles of Church Steward, Church Treasurer and Church Council Secretary unfilled it was reluctantly decided to close at the Church Council meeting in January 1997. The closure date was agreed to be 18 May 1997.

The building was sold and has been converted into a dwelling.