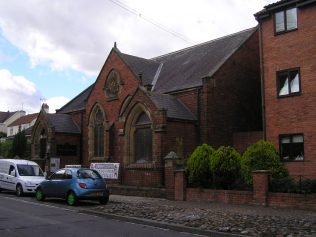 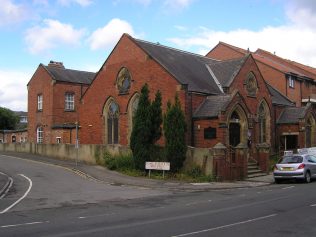 zoom
Chapel and premises to the rear
David Noble 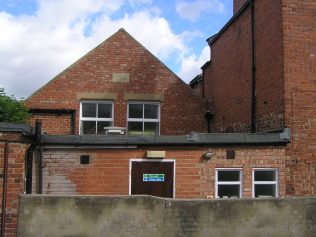 zoom
The original chapel building at the rear
David Noble 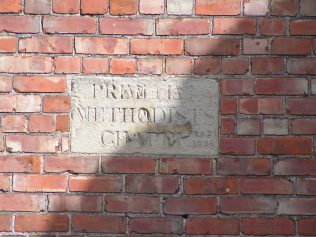 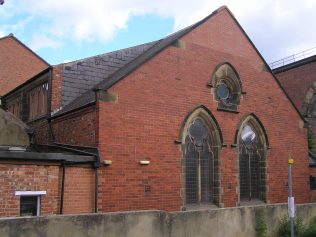 zoom
The south elevation of the 1897 chapel
David Noble 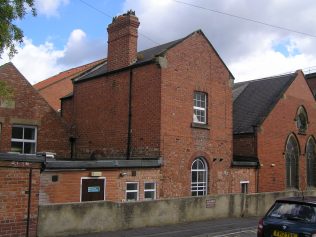 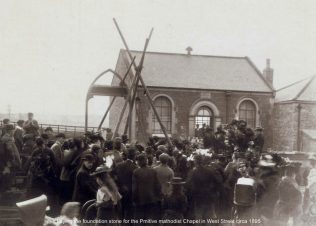 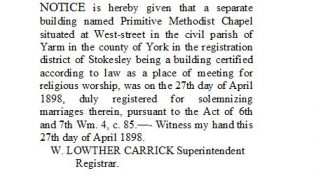 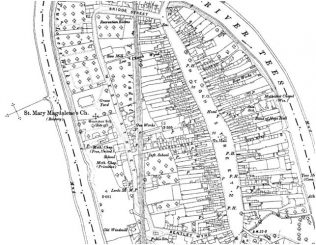 In Methodist heritage circles, the town of Yarm is undoubtedly rather better known for its octagonal ex-Wesleyan chapel (the oldest octagonal church in current use in Methodism, said to be John Wesley’s favourite, and which, in 2013, is celebrating its 250th anniversary) than for its demonstrably unprepossessing ex-Primitive building.

The Victoria County History mentions that “between West Street and the river is the Primitive Methodist chapel, founded before 1831”. Another source [the Yarm Fellowship Hall web site] indicates that the foundation stone of “a primitive Baptist chapel” [sic] was laid in 1822, the building being completed in 1831. It seems incontrovertible that both these sources are speaking of the same building, notwithstanding the fact that the building in question (which still stands today) contains in its south gable wall a stone declaring it to be the “Primitive Methodists Chapel” to which has been added, in the bottom right hand corner, the date February 21, 1836.

The 1:2500 Ordnance Survey map for 1894 shows a Primitive Methodist chapel located at the rear of the site, well set back from West Street. Interestingly, the next but one premises to the north in West Street are marked as a “Free, United” Methodist Chapel. [In 1849 a group known as the Wesleyan Reformers set out to reform Wesleyan Methodism and, being somewhat less than successful in their reforming zeal, in 1857 they eventually joined forces with the Protestant Methodists and the Wesleyan Methodist Association to constitute what became known as the United Methodist Free Church.]

A new chapel is built

Some seventy years after the foundation stone was laid, a major new building was being planned between the original chapel and West Street. According to the Northern Echo for 10 September 1895, “the Primitive Methodist denomination has made great headway in the Stockton district. … In the rural districts around Stockton similar headway is being made, and at Yarm, which is in the Stockton circuit, the present chapel being too small, another one has to be built, and the present structure used for the Sunday school”. Two years later, the North-Eastern Daily Gazette for 1 May 1897 carried a report of the District Meeting Chapel Committee of the Darlington and Stockton District when the erection of a new chapel at Yarm was sanctioned.

The society lost no time in commencing building work A photograph showing the laying of the foundation stone for this new building is dated “circa 1895” (although this is clearly out by two years). The original chapel is clearly visible in the background and, interestingly, it would appear that the current location of the identification stone may not be where it was originally placed. Although it is less than clear on the photograph of the stone-laying for the new chapel, it does look as though it is the original stone that is visible over the door to the church.

On 17 December 1897, the Northern Echo was able to report, at some length, the opening of the new chapel the previous day. [The report of the opening can be downloaded below.] Mrs Clapham, who performed the opening ceremony, was, by marriage, a member of one of the most important and influential local business families, who included among their number a Vice President of the Primitive Methodist Conference (Robert Clapham in 1891). The Methodist Heritage publication A Dales Journey in the footsteps of John Wesley refers to Robert Clapham’s son as “another merchant benefactor, John Robert Clapham, [who] established a Primitive Methodist chapel in Yarm”.

Some accounts say that, at some later unspecified date, a further “middle hall” was built to join together the original chapel and the 1897 chapel. If true, this would suggest that this further building took the place of the ornamental glazed partition” referred to in the newspaper report. There is an alternative suggestion that that the middle room may have been built in 1838, although this seems less likely as there is no sign of it in the photograph of the stone laying ceremony.

On 27 April 1898 the chapel was “duly registered for solemnizing marriages therein”, according to the Notice which appeared in the London Gazette on 3 May 1898.

The premises remained in use as a Primitive Methodist chapel until 1932, and as a Methodist church from then until 1963, when the decision was made to amalgamate with the former Wesleyan society. According to one of the present members of Yarm Methodist Church, the circuit and district authorities of the time considered that the new joint society should make use of the ex-Primitive premises in West Street rather than the ex-Wesleyan octagonal chapel. However, so the story goes, just before the final decision was to be made the boiler burst in the West Street building, so it was decided that the new society would use the octagonal chapel premises instead. Whether by providence, divine intervention or otherwise, that outcome certainly secured a very important example of Methodist heritage for future generations. [More about the octagonal chapel and its history can be found here.]

After the premises ceased to be a Methodist church, the buildings were sold to Yarm Parish Church for use as the parish hall. They were sold again 1976, this time to the Emmanuel Fellowship Church. Some twenty years later, the premises proved to be too small for the Emmanuel Fellowship Church, and in 1996 the buildings were acquired by the Yarm Town council. Today, the Yarm Fellowship Hall is run as a Charitable Trust by the Yarm Fellowship Committee. Two photographs of the current interior of the chapel can be seen on the Trust’s web site, together with a view of the kitchen which, to judge by the design of the window, is located in the original chapel building. The web site also says that “when the charitable trust was set up to run the hall, the trustees decided to call it Yarm Fellowship Hall, as it had always been a community building concerned with fellowship”. As Charles Wesley put it, “all praise to our redeeming Lord”.

“A Dales Journey in the footsteps of John Wesley”, Methodist Heritage