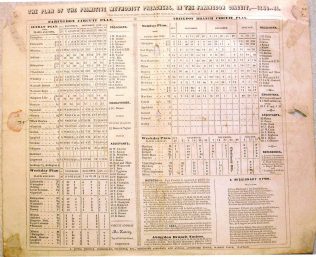 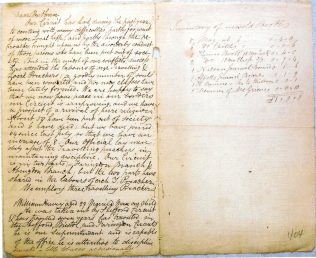 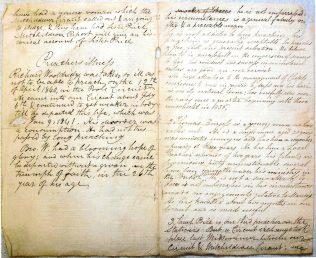 An annual report for the circuit is hand written on the back of this copy of the plan. It gives a fascinating glimpse into joys and difficulties, and the lives of the ministers stationed there:

Our Circuit has had during the past year to contend with many difficulties, partly for want of more local help, and partly through the reproaches brought upon us by the disorderly conduct of those persons who have been put out of society.

But in the midst of our conflicts, success has attended the labours of our Travelling & Local Preachers: a goodly number of souls have been converted, and two new classes have been lately formed. We are happy to say that we now have peace in our borders, our Circuit is improving and we have a prospect of a revival of pure religion. About 50 have been put out of society and 6 have died, but we have joined 64 since last July, so that we have an increase of 8.

Our official lay men duly assist the Travelling preachers in maintaining discipline. Our Circuit is in two parts: Faringdon branch & Abingdon branch, but the two parts have shared in the labours of each T. Preacher.

aged 29 Married Man one child. He was taken out by Shefford Circuit & has travelled seven years has travelled in the Shefford, Bristol and Faringdon Circuits, he is our superintendant and is capable of the office he is attentive to discipline smoakes a little tobacco occasionally. He is not embarrassed in his circumstances, is a general family visiter & a peacable man. He is not addicted to long preaching, his preaching is generally acceptable, he preaches a free, full and present salvation. We believe him to be successful in the conversion of sinners to God, his conduct and success in ministerial duties are good in our circuit. He pays attention to the management of Chapels, conforms to rule in regard to dress and his hair is in its natural form; has carefully read over the rules once a quarter beginning with those consolidated in 1836.

is a young man we have called out. He is a single man aged 20 years, was converted among us and has been a member upwards of three years. He has been a Local Preacher upwards of two years, his talents are promising, piety unquestionable, several have been converted under his ministry in the Bristol Circuit. He is not a smoaker of tobacco is not embarrassed in his circumstances made no engagements relative to Marriage. He has travelled about two months in our Circuit and is made useful.

Richard Wooldridge was taken so ill as not to be able to preach on the 12th of April 1840, in the Poole Circuit. He came into our Circuit about July 6th & continued to get weaker in body till he departed this life, which was Jan 9, 1841. His disorder was a consumption. He had not trespassed by long preaching. Bro. W. had a blooming hope of glory, and when his change came he departed without a groan, in the triumph of faith, in the 26th year of his age.