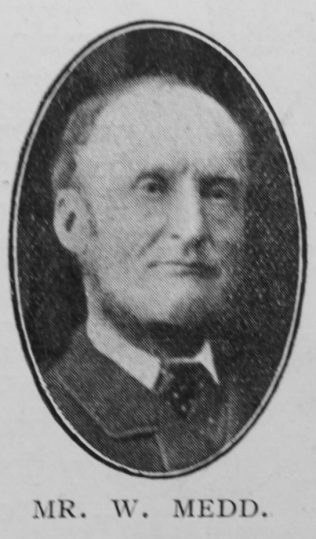 Transcription of obituary published in the Primitive Methodist Magazine by G. Hind

Bro. W. Medd, of Scarborough I. was born at Gauton in 1830, but came to Scarborough early in life. When quite young he found the Saviour, and, joining our Church, soon entered most heartily in the work of his Lord; and when we began to mission the west of Scarborough he was one of the band to establish our St. John’s Road Society. Upon the commencement of a Sunday School he was made the superintendent, a position he held for a considerable time. He was also Society Steward and Choirmaster for many years, and a very acceptable Local Preacher up to the time of his death.

He loved his Church, and entered into all her activities with a whole-hearted enthusiasm which was contagious. Especially was this the case with open-air services. For about half a century his life was given to our St. John’s Road Society, taking a foremost part in all her enterprises, only ceasing as age and infirmity compelled him. He left us June 15th, 1911, and when laid to rest in our beautiful cemetery a large concourse of representatives from all parts bore eloquent testimony to the mighty influence of his saintly life.

Note: William was born at Ganton, not Gauton as stated in the obituary.