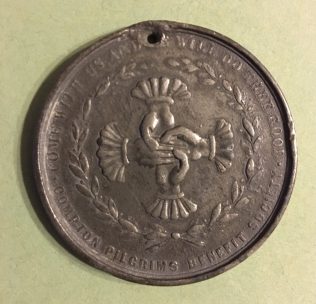 zoom
Four clasped hands in centre within a wreath of laurel leaves and berries surrounded by: COME THOU WITH US, AND WE WILL DO THEE GOOD (above), COMPTON PILGRIMS BENEFIT SOCIETY (below)
Englesea Brook Museum 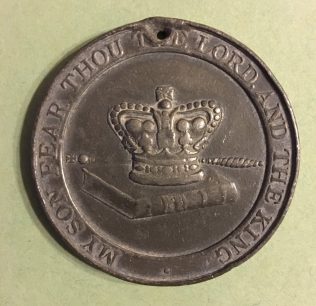 zoom
Reverse: A crown and sceptre resting on a Holy Bible surrounded by: MY SON FEAR THOU THE LORD AND THE KING
Englesea Brook Museum

The Compton Pilgrims Benefit Society originated from a meeting on 1st May 1835 when ‘a few labouring men, in conjunction with Robert Langford, a Primitive Methodist minister, met at the cottage of William Middleton for the purpose of forming a Benefit Society apart from the public house’. Despite modest beginnings with a membership of only 199 by 1862, the Society became one of the country’s principal registered friendly societies with a membership of 5,004 in 1912. Membership decreased during the first world war but had recovered to 4,588 by 1927. Between the two wars the friendly society activities were continued, alongside a new role as an Approved Society under the state National Health Insurance Scheme and continued to operate until 1964.

In 1885 the Society celebrated its jubilee and the Reading Observer dated 30 May 1885 carried a report which stated that, ‘Though not a Primitive Methodist Club in the sense of being allied with that denomination, those who founded it and have since been the leading spirits in guiding its destinies, have been mostly of that persuasion’. The report continued ‘The Society has not enjoyed any particular patronage or a list of honorary members; the men have throughout depended on themselves.’ The influence and connection with Methodism continued for some time, the Berks and Oxon Advertiser dated 24 July 1891 reporting that a well-attended committee meeting of the Society had been held at the Primitive Methodist Chapel in Compton to receive the quinquennial valuation and amend the rules.  There were, however, no political or religious conditions imposed on the membership. As time passed, the Society became less insular and in 1888, the annual meeting was chaired by the Mayor of Newbury and in 1907 an Anglican clergyman took the chair.

One incentive often applying to the joining of a friendly society, i.e. regular public house nights, did not apply to the Compton Pilgrims Society. Unity and brotherhood were, however, fostered by the annual Whit Monday meetings in Compton when the members, dressed in their Sunday suits, wore the Society’s medallion attached with a pin and light blue ribbon. These proceedings comprised business meetings and elections, a religious open air service where addresses were delivered and the provision of meals.

An article entitled ‘A Friendly Society Case Study: The Compton Pilgrims Benefit Society’ by Malcolm Bee appeared in A Review of the History of Southern England volume 11/1989 published by the Southern History Society which provides a detailed history of the Compton Pilgrims Society. The Study concluded: ‘In 1986, when this study was undertaken, the Compton Pilgrims’ former headquarters were unoccupied, … and the Primitive Methodist Chapel stood derelict. Little remained in Compton to bring to mind former glories. Yet for 130 years this otherwise unremarkable small village was the home of an enterprise which gave support and security to many thousands of people. Without ever losing sight of its village club identity, the Society was able to manage complex and large scale business affairs with efficiency and skill. A more successful and impressive self help venture by labouring men would, surely, be difficult to find.’

Note
The medallion shown is one of two varieties. The other has the date 1836 on the reverse, with the words, ‘My Son Fear Thou the Lord and the Queen’.