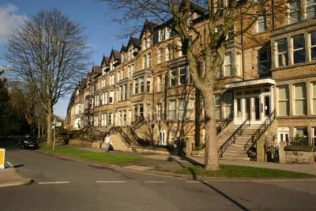 Following the death of her father in 1869, her mother moved Ann and her other four siblings, still living at home, to Harrogate. In the fourth quarter of 1876 Ann married Henry Walls Auton in Harrogate, and in 1881 they were living at 5 Claro Terrace, Harrogate with the first three of their eventual ten children.

Henry was born in 1849 in Hunton at the eastern end of Wensleydale and about 30 miles north of Harrogate. His parents were agricultural labourers but Henry forsook the land. The 1871 census found him working as a live-in shoemaker with what appeared to be a drapery & men’s outfitting business, also employing two live-in tailors, in Leyburn a few miles west of his birthplace. In the 1881 census, after his marriage, his occupation was given as “boot and shoemaker”.

In 1900 Henry was one of the twenty-three Trustees of the Dragon Parade Primitive Methodist Church. By 1901 Ann & Henry had moved to 50 Walker Road, Harrogate. At this time Henry gave his occupation as “boot maker and dealer” and was classed as an employer rather than a worker, as previously. The 1911 Census return, completed by Henry himself, is of interest from several points of view. The handwriting is appalling and it is difficult to make out the names of the other ten people listed in addition to Henry & Ann. Also he struggled a bit with spelling and it gives the impression of not having been written by a well educated man which is not surprising considering his humble origins. However, I do wonder if the poor handwriting was down to occupational arthritis owing to 40 years of boot and shoemaking.

The address, Wentworth House, 7 Valley Drive, Harrogate is significant as is the size of the dwelling with 12 rooms. Valley Drive was, and still is as the photograph shows, a prestigious area of Harrogate to live in. Henry now described himself as “boot dealer”. So who were the 10 others living there with Ann & Henry:-

Their eldest and married daughter with her 3 children;

Their “neace, Florance Mable Shutt” [the spelling is not mine and she was actually the grand-daughter of Ann’s elder sister Jane and hence Henry’s great-niece];

A 1913 article in the Christian Messenger shows Henry’s support of the Church was much appreciated. Being a Church Trustee would have incurred some financial liability and I think we can conclude that by this time Henry was a man of substance to the benefit of Ann, his children and the Dragon Parade Church.

Ann passed away in 1917 but Henry survived for another 17 years. As you can see from the listing below Ann left 6 surviving children. I have managed to identify two of those that died in infancy and consequently never showed up on a census return but the third eludes me. Their nine identified children were:-

Clara Isabel 1879-1955, she married Edward Leng and had two children, she died in Harrogate

Frances Jemima 1887-?, she emigrated to Canada and played a crucial part in her father’s subsequent life

Florence Daisy Bertha 1889-1914, in 1911 she was working as a drapery assistant in Marshall & Snelgrove’s, she died unmarried in Harrogate

Blanche Violet 1891-1918, in 1911 she was working but her occupation and workplace are illegible on the return, she died unmarried in Harrogate

Looking at Mary Annie, Robert Henry, Frances Jemima and Horace Wilfred in more detail is of interest and gives an insight into how their father spent his widower years.

Robert Henry married Mary Ann Garth (1880-1969) in Harrogate in 1907. Prior to the Great War he worked for the Prudential Assurance Company. He enlisted in the West Yorkshire Regiment and served on the Western Front. He grew friendly with the Editor of the Halifax Herald, W H Breare, who throughout the war ensured “Harrogate Boys” received regular news from their home town. Robert was very appreciative of this and wrote several letters from the front which the Herald published. He reported that his battalion spent Christmas 1916 in billets but the village did not contain a building large enough for them all to have Christmas dinner together. So Robert celebrated Christmas on 23rd December and sat down to dinner at 5pm which consisted of “roast pork, apple sauce, potatoes, cabbage, onion stuffing, followed by a nice helping of Xmas pudding and rum sauce, everyone getting a good share and satisfaction”. The Roll of Honour in the Harrogate Herald of 7th February 1917 reported “Private Robert H Auton, eldest son of Mr H Walls Auton, of Harrogate, has been wounded and is in No 3 General Hospital, France.” In April 1917 Robert reported his head wound was better and he was back in the trenches though his nerves were “very shaky yet”. In May 1917 he requested a cricket set from the people of Harrogate to help the lads occupy the summer evenings when they were away from the trenches. In late November 1917 Robert was home on leave when his mother died. W H Breare helped him get an extension to his leave for which Robert was extremely grateful. Robert and Mary do not appear to have had any children. The 1939 Register finds them living at 46 King’s Road Harrogate and Robert appeared to have taken over his father’s business at some time as his occupation was given as “boot dealer (retired)”. Robert passed away in Harrogate on 26th March 1941 aged 62 and left £442 (worth £24k in today’s money).

Frances Jemima emigrated to Canada in 1910; she appeared to go as an unaccompanied single lady. The 1911 Canadian census found her, aged 24, working as a servant for a Toronto family. In Toronto she met and married Florencis Swan, who was born in Hertfordshire and emigrated to Canada in 1906. They married on 27th June 1912 and both gave their religion as “Methodist”. Before Florencis went to war in March 1916 they had one child, Florence (b 1914). When Florencis returned, presumably safe and sound, they had twins, Eric & Edith (b 1919).

Shortly afterwards, on 1st October 1920, Frances Jemima’s widowed father, aged 71, boarded the SS Minnedosa in Liverpool and set sail for Canada. On arrival Henry stated his religion was “Primitive Methodist” and his intention was to stay permanently in Canada. The 1921 Canadian census return shows Henry Walls Auton living with Frances & Florencis and family in Toronto. Henry gave his occupation as “boot maker” and Florencis was a “conductor”, the latter I presume as in train/bus rather than musical. Then on 5th August 1922 Henry, now aged 73, got married for a second time to Helen Grimbell, a widow 4 years his junior and born in Ontario. Both gave their religion as “Methodist”. In the following year, from the form his grandson, Alec Appleton (see above), completed on arrival in Canada we can only assume Henry was actually making boots in Canada and needed assistance. Alec’s form also stated that his grandfather paid his fare. I can find no further information to tell me what happened to Alec, Frances, Florencis and their children after 1923 but Henry returned to England and died in Leeds in 1934.

Horace Wilfred served in the Great War. He enlisted in the West Yorkshire Regiment like his brother but was transferred to the Royal Field Artillery. He was a “Driver” which meant he drove and looked after the heavy horses used for moving the artillery pieces and pulling the ammunition wagons. He spent the war in Salonika and like most of the soldiers who served in the mosquito infested Struma Valley he contracted malaria. This resulted in him being hospitalised twice, in August 1917 and October 1918. The effects of malaria would have remained with him for the rest of his life and may have contributed to his premature death. In 1924 he married Doris Hodds (1896-1959) and they had two sons. At the time of the 1939 Register the family lived in Leeds and Horace worked as a “Railway Clerk”. Horace died in Leeds on 5th May 1944 aged 48 and left an estate of £415 (worth £18k in today’s money).