A Worthy Pair and their Diamond Wedding 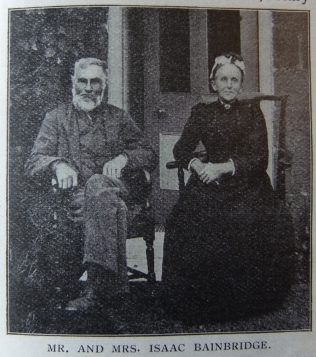 Transcription of article in the Christian Messenger

On Marth 10th, Mr.  and Mrs. Isaac Bainbridge, of Ingleby, celebrated their dismond wedding at Mr. and Mrs. Henry Bainbridge’s Westwood Farm, Ingleby Greenhow. Mr. and Mrs. Bainbridge were married at Bishop Auckland on March 10th, 1846. They have reared eleven children, all of whom have married. Living to-day in direct line are nine children, fifty grandchildren, and thirty-seven great-grandchildren. Of sons and daughters-in-law, grandsons and grand-daughters-in-law there are twenty-one; making a grand total of 117. There were assembled on Saturday March 10th, seventy-seven of these descendants to do honour to their respected and venerable progenitors. After tea congratulations and good wishes for continued health and life were given by Messers. Burton, Henry Bainbridge, W. Watson, and the Rev. Mark Pattison. The grand old man replied, thanking most heartily all for their profound regard and good wishes, but forgetting not to give thanks to God for the guidance and favours He had shown to them throughout their married life. “Yea,” said he, “the Divine Father has been with us from the beginning.” He thought that God had something to do in the selection of his name. Whereupon he told us that he had been sent by his mother to the Church to be christened Joseph. “Nay,” said the god minister when the child was presented to him, “call him not Joseph but Isaac.” Of what he was certain was that the promise of Isaac had been undoubtedly extended to him. God had multiplied his seed and crowned his life with many blessings.

Mrs Bainbridge belongs to Holme of the County of Westmorland; Mr. Bainbridge is a Weardale man. Throughout their married life both Mr. and Mrs. Bainbridge have been loyal and zealous Primitive Methodists.

Mr. Bainbridge joined our Church in 1845. In 1848, he became a local preacher and has till quite recently done splendid service in that sphere. He has been Class leader, Society and Circuit Steward, Sunday-school Superintendent; in fact he has held every office open to laymen in the Connexion with the exception of being vice-president of Conference. Repeatedly he has represented the Circuit at the District Meeting and the District Meeting at the Conference.

The gathering on Saturday was unique not only in its rarity, in its number of blood relatives, but in the finer sense it was unique in its moral and Christian character.

All the sons are worthy Christians, Preachers, and Class Leaders. All the sons-in-law with their wives belong to the Methodist Church; and to these belonged the late Rev. Featherstone Watson, who died at Stokesley in May, 1904, after two years of hard work in which he built a church, school, and minister’s house in Stokesley. Many of their grandchildren are earnest and zealous workers in Church life.

There was perhaps something fitting in the celebration of the diamond wedding at Westwood Farm, Greenhow, since for over forty years this was to them not only their home but the house of God. Greenhow, having a sparse population, it was never thought advisable to build a church.

Mr. and Mrs. Bainbridge established our cause there by opening their home for Divine service. Throughout these years services continued to be held in their home. Upon their retirement and removal to Ingleby the farmstead fortunately fell into the hands of Mr. and Mrs. Henry Bainbridge whose great joy and delight it is to be able to carry on the good work commenced so many years ago by their respected father and mother.

The work here of these two loyal servants of Christ cannot be over-estimated. What an outlying place like Greenhow might have been had Mr. Bainbridge been otherwise disposed God only knows. The grand fact, however, is, his heart is penetrated by the love of God.

In Westwood Farm, Greeenhow, have been brought up some of the most worthy sons and daughters Primitive Methodism has reared.

Mr. Bainbridge is now in his 85th year and Mrs. Bainbridge is in her 80th year. Both are healthy and give promise of seeing and enjoying a few more years of this life.

Isaac died in the spring of 1908 at Ingleby, Yorkshire.