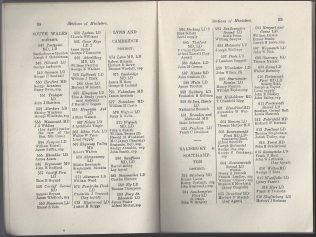 An initial article on John George Wilding raised questions about whether he was a Primitive Methodist minister, as he does not appear in the official lists.

Further research has revealed the answer. The Minutes of the Primitive Methodist Connexion, which list all the circuits and show where ministers were stationed, show J G Wilding stationed in the Monmouth and Lydbrook Circuit from 1919-1922. They also reveal that he was not a minister, but a ‘lay agent’, under the care of the District Mission Committee.

This suggests that the PM society in Monmouth could not afford to pay for a minister, but the town was recognised as a place that needed support. The District would have advertised for a paid local preacher, and John Wilding must have applied to go from Yorkshire to the mission field of South Wales. Quite a brave undertaking for the whole family.