Memories of the chapel in North West Essex 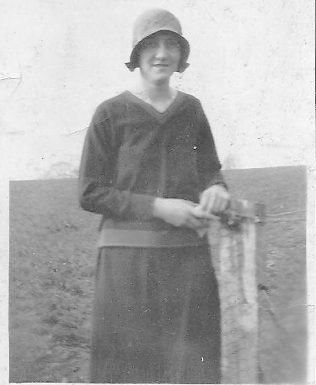 In 1972 the mother of the Rev Douglas Savill, Mrs Florence Hilda Savill ( nee Wombwell) wrote the following words about  the Chapel in Langley.

“ Langley Primitive Methodist Chapel was built in 1862, opened at Easter and enlarged in 1872.  Not a large Chapel but it held about 100 people and was heated by a large round stove until July 1952 when Electricity was installed.

My earliest memories of attending chapel go back to the time when as a toddler I was taken to chapel services twice on Sunday. Usually my father, Ether George Wombwell went to all three services but occasionally he would cook dinner whilst mother attended morning service.  From the age of four years we all had to go to Sunday School regularly at 10. am and 1.30 pm, followed by services at 11 am, 2.30 pm and 6pm. We lived over a mile from the P.M. Chapel, and illness was the only excuse for staying away.  On special days, Anniversaries, Harvest Festival, etc we stayed for tea in the vestry, or went to an Aunt’s who lived nearby.

It was only after we left Day School and went out to work at 14 years of age that I could only attend once or twice on Sunday.

Our meetings were very lively in those days, and very free and easy, with “Praise the Lord”, “Hallelujahs ”, “Amen” heard frequently coming from the congregation, and as a hymn finished someone would strike up the last verse again and sing it with great gusto.

A  Prayer Meeting always followed evening service, and many a time I remember two people starting off at once.

Our Sunday School Teachers and Preachers taught us many things that I shall never forget even though many were uneducated; they were true Christians who certainly knew their Bibles.

Love Feasts were also popular with men and women, young and old, getting to their feet to give their Testimonies and telling what God had done for them and praying in the love and humble gratitude our hearts felt.

For many years our Chapel Anniversary was held on Easter Sunday when seats had to be placed in the aisle.  On Good Friday too a special service was always held, often with the village Brass Band in attendance.  “Service of Songs” were very popular for Good Friday and the evening always finished up with a Coffee Supper, a time of happy fellowship together before washing up.

Sunday School Anniversary’s were, and still are, held on the 3rd Sunday in June. The number of Scholars much lower than 50 years ago, but still as enthusiastic with loyal Teachers and helpers to guide the boys and girls along.”