You are here: HomenextPeoplenextFamily HistorynextMiss Crellin - A Busy Missionary Collector 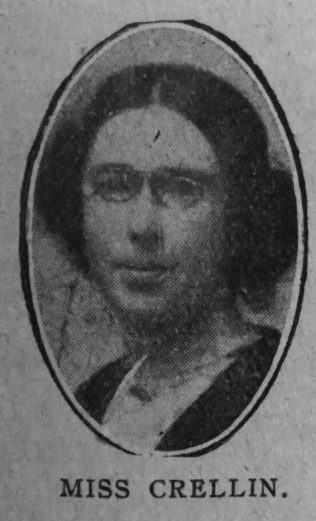 MISS CRELLIN is a member of our Millom Church in the Dalton and Millom Circuit. For years she has shown considerable interest in Missionary work. Every year finds her usual subscription of £2 to hand. This means sacrifice, but being a believer in systematic giving, there is pleasure in handing over the gift. As a missionary in home activity, the same spirit is shown in her profound interest in the work of the Foreign Field. From Sunday School days as a scholar until now her enthusiasm has remained strong. In a humble and unassuming way, Miss Crellin does her wonderful work. At Millom people know her worth and fully appreciate her life. To such devoted lives we owe much.

God uses her; she is glad to be of use.

It is probable that the subject of this sketch was either Sarah Amelia Crellin born about 1879 at Dalton in Furness, Lancashire, or her sister, Gertrude, born in 1884 at Millom. Their parents were George and Sarah, both originally from the Isle of Man. George was an iron ore miner in 1911.

At the time of the 1911 census Sarah was working as a draper’s assistant at Millom. Sarah died in the spring of 1952 at Millom.

The 1911 census gives no occupation for Gertrude. She died in late 1929 at Millom.

Can anyone identify the subject of the sketch?