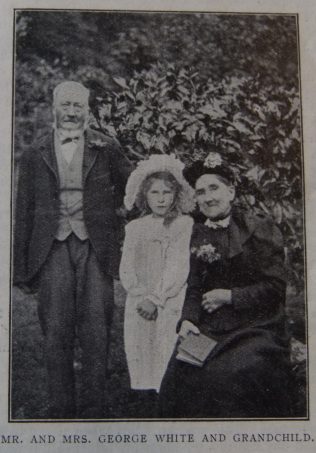 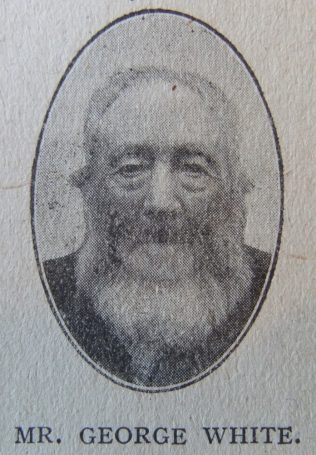 Transcription of ‘Sketch’ In the Christian Messenger by Rev. W.L. Taylor

Deserved congratulations have recently been showered upon Mr. and Mrs. George White, of the village of Martin, in the Wilton Circuit, upon the celebration of their “diamond” wedding. Our brother is eighty-three years of age, and his good dame three years younger.

For three score years, in weal and woe, “for better, for worse,” this saintly couple have pursued their matrimonial way, happy in the love which each bore the other, and gradually winning the esteem of an ever-widening circle of friends. For all these years our friends have been deeply attached to the Church of their choice, and have ever gloried in the genius and traditions of Primitive Methodism. They can tell many interesting and romantic things connected with the early work of our fathers in this part of the country. They were married on August 10th, 1850, in the parish church of Martin, though our brother in telling of this was always careful to say that “it was not easy to get married in a Nonconformist place of worship in those days, ”the suggestion being strong that as a Free Churchman he would have been glad to have availed himself of the privilege. Martin Chapel has long since been licensed for marriages, and many happy couples have made their start in life there.

The life story of our friends is a touching chapter from the “short and simple annals of the poor.” Mr. White’s wages as under carter at the time of his marriage were six shillings and sixpence per week, and when, at the Michaelmas following he was given seven shillings weekly with a cottage rent free, they thought they were living in a veritable Paradise. How they managed they only could tell; with such economic environment they brought up eight children, many of whom to-day are loyal Primitive Methodists, and the numerous grandchildren are being nurtured in the same way. A step forward was taken when Mr. White secured a carriers business, necessitating his removal to Bishopstone, near Salisbury. He was a familiar figure in the wide market place of Salisbury twice a week for many years. The rough weather to which he was exposed in these journeyings tried his physique, and tested his religion. He came to the local preacher’s list too late in life to acquire great distinction, but ‘the plodding work has been done most ungrudgingly. On a recenl Sunday he walked to Sixpenny Handley, seven miles from home, to preach twice. He has toiled in Sunday school, and has been Class leader at Martin for a long time.

And so will it be to the end: his heart ever young, his hands ever willing, his feet ever ready to go at the call of duty, to live his life “as ever in the Great Taskmaster’s eye.”

The State pension of five shillings per week has been a timely help to this brave couple, who have lived a strenuous life, and made their contribution to the nation’s weal in industry and character.

Our “Darby and Joan” look so young for their years that it does not seem out of place for us to wish them a long and happy eventide.

George was baptised on 29 May 1828 at Martin, Wiltshire. His parents were Simon and Charlotte.

George’s obituary records that he was a member of the PM church for seventy-four years. He was always a very sturdy supporter of the temperance cause, and in the early days, when to be such was considered eccentric, he was bitterly persecuted.