You are here: HomenextPeoplenextFamily HistorynextMr and Mrs Moore of Winlaton

Mr and Mrs Moore of Winlaton

Includes information about the history of the Winlaton Society, Co. Durham 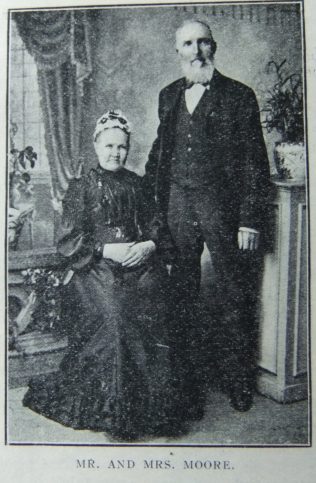 Transcription of Magazine ‘Sketch’ in the Series ‘Among the Veterans’ by Rev. R Heppenstall

Mr. and Mrs. Moore for nearly forty years have been connected with our Winlaton society, and are deservedly held in very high esteem by a wide circle of friends. Their home has always been a “preacher’s home,” and it has been one of their greatest pleasures to entertain ministers and local preachers who have travelled or visited the church at Winlaton.

This church has a most interesting history. In 1821-2 William and Mary Surtees arrived at Winlaton and preached in the open air close to where the post-office now stands. A great crowd gathered, and as they sang and prayed many wept, and many were deeply affected by the message they heard. The evangelists, on this their first visit, had the joy of witnessing many converted, and they at once formed of these new converts the nucleus of the present church.

The cause so greatly prospered that Winlaton, which at this time was in the Hull Circuit, became the head of a Circuit, one of great width, embracing such places as Spen, Shottley Bridge, etc. It was in 1850 that a chapel was built – a small structure, with an inconvenient entrance – altogether uninviting. In a few years this was enlarged, and to-day Winlaton Church is a beautiful village sanctuary.

Mr. Moore was for fourteen years society steward, and Mrs. Moore has been a class leader for twenty-four years.

Locally our brother is called “Bishop of Winlaton,” and he makes an interesting figure. He is a man of independent views, and calls a “spade a spade.” His Primitive Methodism is thorough, and bigots find it to their advantage not to discuss with him the rights of our church to exist. He is a rigid disciplinarian, and fearless in defence or opposition. Time passes pleasantly as he talks to you of old ministers in this Circuit—Peter Clarke, Thos. Southron, Colin C. McKechnie, Dr. John Watson, ]ohn Welford, and others.

Our brother is a great visitor, not for gossip, but on his Master’s business. He knows the history of nearly all the members of the society. He distributes the Circuit quarterly plan and tea tickets by personally calling upon the members and many who are not members. He succeeds where others fail.

Twenty-five year‘s ago a great Revival broke out at Winlaton, which brought together all sections of the Nonconformist churches. The services were held in the Drill Hall both weekday and Sunday, and our own chapel was closed. A large number were converted, the majority of whom joined our church. Mr. Moore keeps to this day a record of names of those who were added to the church in that Revival.

Mrs. Moore is a mother in Israel – kind, hospitable, and with a keen desire for the prosperity of the church.

As a class leader she excels, and her in?uence amongst the members of the Church is very great. She rarely misses a week evening service whatever be the state of the weather, and in times of sorrow and sickness her presence and help are willingly given. Both have seen great changes in the society during their thirty-seven years’ connection with it, and its present position owes much to their unceasing labour and devotion.

The church is to-day in a healthy condition, and in the near future a more commodious building will have to be erected to meet growing needs of this district.

The subjects of this sketch were probably Thomas and Isabella Moore.

Thomas was born abt 1831 at Knaresdale, Northumberland, to parents Henry and Mary. Henry was a stone mason, a trade which Thomas also followed.

Isabella Elliott was born abt 1841 at Brampton, Cumberland. Her father, John was a maltster. She married Thomas on 22 June 1867 at Lambley, Northumberland. Census returns identify four children.