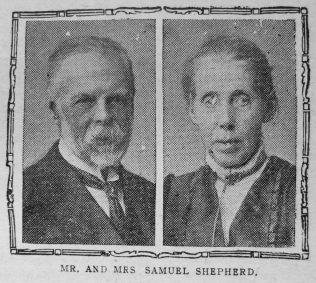 Transcription of a sketch in the Christian Messenger by Rev. F. Pickett

ONE has often wondered why the Scripture, “The righteous shall be had in everlasting remembrance,” is nearly always used as if it referred exclusively to those who have lived their day and gone from us. But there are many, thank God, who should not wait for posthumous fame and appreciation. The name of Mr. Samuel Shepherd, now of Woodville, in the Church Gresley Circuit, is a precious fragrance to many over a large area of the Nottingham District, and he will be on the roll of worthies for many generations when he has passed on. Though he has just celebrated his eighty-first birthday, he is still going strong; very rarely consults a doctor, can put in an appearance at the Sunday morning school, take part in the closing prayer-meeting of the day, and rarely misses a week evening service. His life began at Melbourne, in the county of Derby, his father being the village blacksmith, to which business the son was apprenticed, and served his time with an uncle at Doveridge, near to Uttoxeter. As a youth he went to the Wesleyan Sunday School, but on removing to Derby about fifty-five years ago, he was for some time associated with the Church of England. One Sunday evening he went to the Traffic Street Church, where the Rev. J. Cooper Antliff, B.D., was preaching a memorial sermon for one of the Sunday School teachers, and that service led to his decision for Christ and membership in our church. Soon after, he married a daughter of the late Mr. Joseph Hare, a much respected Trustee and member of Traffic Street, who happily is still spared to him, and therefore he has recently celebrated a triple jubilee, first, of his conversion and membership in our church, secondly of his connection with Sunday School work, and thirdly, of a happy married estate.

Mr, Shepherd has been called to much and varied service in the church, and has had very close connection with some of the leading ministers, such as the late Dr. S. Antliff, J. Wenn, C. Lace, C.H. Boden and many others. For seventeen years he held the office of Society steward at Traffic Street, and was superintendent of the Sunday School for fifteen years. He signed the Temperance Pledge in 1861, and has been an ardent worker ever since, both in the Derby Band of Hope Union and the famous Derby Temperance Society, and is still an honoured Vice-President of the latter. He has also been an active and much esteemed member of the Nottingham District Committee, and after twenty-two years service has just retired, owing to defective hearing, from the position of Treasurer to the District Sunday School Committee, with the warmest esteem of all the brethren.

Some twenty-four years ago he retired from the business of confectioner and caterer and settled down at Woodville, in the Church Gresley Circuit, where he has secured troops of friends. He has been richly blessed in his family, one son and two daughters, each of whom have married earnest and active members of our church, and with their children in turn are held fast in one love, one holy faith, and in one religious household. There are many who say: “We give thanks to God for every remembrance of thee.”

Samuel was born in 1839 at Melbourne, Derbyshire, to parents John and Ann.