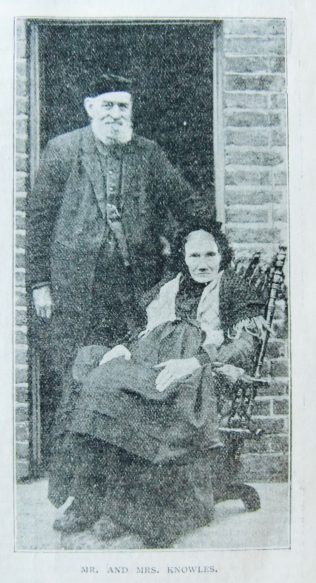 Transcription of Sketch in the Christian Messenger by J.P.L. (James P. Langham)

A GOLDEN wedding is a rare occurrence, and when celebrated, the rejoicing pair have usually left far behind all the companions of their youth. The few who are permitted to pass this golden milestone feel that their rejoicing is shadowed by the fear of possible separation; for they know that hand in hand they are going down the hill of life and may be called to part any day. When the fifty years of married life lengthen into sixty-eight the case becomes so exceptional that it is worthy of special record. In the Primitive Methodist for May, 1881, the following paragraph appeared:—

‘On Tuesday, May 3rd, the Golden Wedding of Mr. John Knowles was celebrated in our new chapel, Eglinton-road, Woolwich. Mr. Knowles has been a local preacher about forty years. Both he and his wife have long and well served the Connexion in varied ways. It was the wish of the family that all the circuit officials and others should take tea together, and some eighty of the friends came together to congratulate this honoured and aged couple. The schoolroom was adorned with beautiful flowers and mottoes. After tea the Rev. John Phillips was called to preside. Addresses were given by the Rev. W.H. Allen, Messrs. Walton, Brett, Day, Renshaw, J. Chapman, and S. Plummer. Two handsome and valuable flower-vases were presented by Mrs. Chapman. Mr. S. Plummer, in the name of the officials, presented Mr. Knowles with a copy of ‘The Life of Clowes.’ The Rev. J. Phillips presented Mrs. Knowles with ‘The Life of Hugh Bourne,’ and several other tokens of love and esteem were given. Mr. John Knowles, the eldest son, in the name of the family, then gave to his father a new wedding ring. A hymn was sung, and the scene was touching and impressive.’

That touching and impressive scene occurred over eighteen years ago. The photograph at the head of this sketch shows Mr. and Mrs. Knowles sitting at their cottage door. When it was taken they were both in the eighty-sixth year of their age, and retaining a keen interest in Connexional affairs and a lively concern for the welfare of their family and friends. It would be difficult to find another case where husband and wife have been permitted to complete the sixty-eighth year of married life.

Mr. Knowles was born in 1813, married in 1831, joined the Primitive Methodist Church in 1841, became a local preacher in 1842, and kept his place upon the plan until October 26th, when he passed upward to his reward. And now Mrs. Knowles must tread the last few steps of her long journey alone. Our sympathies go out towards her in her loneliness; but we know how courageously she will take ‘life’s burden up, nor ask it less.’ She will calmly wait all the days of her appointed time in the full expectation of a blesse re-union in the skies.

This man and woman, of whom we write, earned for themselves the esteem of those who knew them. The former part of their married life was spent at Downham in Norfolk, where for twenty-six years Mr. Knowles served in the Post Office. During those early years their home was the EVER-OPEN DOOR towards which the travelling preachers of the infant Connexion made their way with joyous haste. In those days homes were few an far between, and the early preachers had no scruple in making their way, when hungry and tired, to this home, where no formal invitation was necessary. The Connexion’s early victories were due, not only to the vigour and resourcefulness of the preachers, but to the generosity of the very poor who parted their food and turned out of their own beds to give the preachers food and rest. Mr, Knowles sometimes spoke with pleasure of the two district meetings he attended as delegate, and of the Conference at Leeds to which he was sent, and over which the Rev. Thomas Newell presided. But his most joyous recollections, which were equally precious to his wife, were of success in the old Norwich District, when Robert Key, W.H. Meadows, John Smith, senior, Thomas Lowe, and the writer’s father (James Langham) were in the flower of their strength, winning victories for God all over East Anglia. The work so auspiciously begun by the ‘travelling’ preachers was maintained and consolidated by faithful local preachers amid the scattered hamlets and villages of Norfolk and Suffolk. So efficiently did these early workers labour that until this day Primitive Methodism is one of the mightiest factors in the religious life of that part of the country. Probably in no part of the kingdom was a greater and more permanent work done than that which rescued the farm-labourers of the eastern counties from the thraldom of ignorance, apathy, and sensuality. To this work Mr. and Mrs. Knowles gave unstintedly, time, substance and energy.

I think it is now becoming clear why these people are worthy of a place in the gallery of ‘People worth remembering.’

They are worthy to be remembered because for sixty-eight years they fought, side by side, in the battle of life, and neither of them lost heart and hope. In my last interview with them I was struck by the brightness and cheerfulness of their dispositions. Their wrinkled faces and bending forms spoke of age, but their hopeful words and genial smiles testified to the perennial youth of their hearts.

For fifty-eight years they had been true to their religious convictions and maintained an unbroken fellowship with the Church of their choice.

Mrs. Knowles was one of the most industrious of women. To use a common expression she had not an idle bone in her body. She would not suffer others to do for her what she could do for herself. When over eighty-five years of age she managed to do all her household work, and her house was as clean as a new pin. In work she delighted, and nothing would distress her more than to think she could no longer wait upon herself. She detested the thought of living an easy, self-indulgent life.

These faithful companions through nearly three-quarters of a century will be remembered, by those who knew them, as having lived a simple, quiet, useful, honourable life – a life brightened and elevated by unwavering faith in God.
‘Let not ambition mock their useful toil,
Their simple joys, and destiny obscure;
Nor grandeur hear, with a disdainful smile,
The short and simple annals of the poor.’

The links between the early days of the Connexion and the present are becoming fewer every day. In Mrs. Knowles, still residing at Woolwich, a link remains. How soon that link may fall out of its place we know not, but she may feel assured that the few who knew her and her husband in the brave days of old, will send flowing towards her streams of sympathy and prayer.

In a little while she, too, will join the great majority, and the peaceful conclusion of life’s voyage, which Cowper portrays, she will share with her husband, who has just passed on before her.
‘Thou, as a gallant bark from Albion’s coast,
(The storms all weathered and the ocean crossed,)
Shoots into port at some well-havened isle,
Where spices breathe, and brighter seasons smile,
There sits quiescent on the floods, that sho
Her beauteous form reflected clear below,
While airs, impregnated with incense, play
Around her, fanning light her streamers gay;
So thou, with sails how swift! hast reached the shore,
Where tempests never beat, nor billows roar,’
And thy loved consort on the dangerous tide
Of life, long since has anchored by thy side.’

John Atkin Knowles was born in 1813 at Ely, Cambridgeshire.