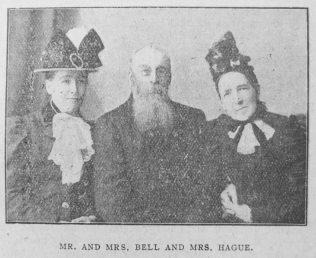 Transcription of ‘Sketch’ In the Christian Messenger by J.P. Langham

SOON after I came to Lincoln in July, 1916, I made the acquaintance of Mr. and Mrs. Bell, who were most regular in attendance at the various means of grace. I saw that they were elderly, but had no thought that they had both left the eightieth milestone on the road behind them. Their alertness, attentiveness and devotion were very manifest. Early in October of that year, Mr. Bell passed onward, and from conversation with his widow, I learned that I had under-estimated their ages by at least ten years. Mr. Bell had for many years done fine service in the Sunday-school, and was regarded as a Temperance pioneer, whose services to the Lincoln Temperance Society, one of the oldest and most vigorous in the kingdom, had been most efficient. Mrs. Bell is in her eighty-sixth year, and still takes oversight of a society class, though no longer at work in the Sunday-school, to which for many years she rendered eminent service. She is one of the happiest women I know. The light is round her at eventide. As she sat one afternoon on a bench in the Arboretum, one of the beauty spots of Lincoln, she was so full of thankfulness to God our Father for His many gifts of love, that she composed the verses given below. She wrote them on postcards, and Mrs. Hague, her eldest daughter, copied them in ink to preserve them from destruction. At a Women‘s Missionary Meeting Mrs. Bell recited them, to the delight of all present, and I have pleasure in sending them for publication. They might very rightly be entitled:

“ A War-time Song of Thankfulness.”

A WAR-TIME SONG OF THANKFULNESS.

I thank Thee for the fragrant rose,
The queen of summer ?owers;
Carnations, pinks, sweet gifts of love,
To cheer our lonely hours.

Such rich profusion meets the eye.
In every shade and hue;
Lilies arrayed in spotless white
Forget-me-nots in blue.

All, all, are beautiful and good,
Reminding us of Thee;
With grateful hearts we look and say.
What! must the Maker be?

We pray Thee to accept our thanks,
For blessings, Thou hast given;
Help us to do Thy will on earth,
As angels do in Heaven.”

William James Bell was baptised in 1828 at St. Mary Barton-upon-Humber, Lincolnshire. His parents were Enoch and Diana.

William was a bricklayer and builder. He married Mary Naylor (1832-1923) on 7 October 1853 at Ingham, Lincolnshire. Her parents were Thomas and Elizabeth. Census returns identify seven children.